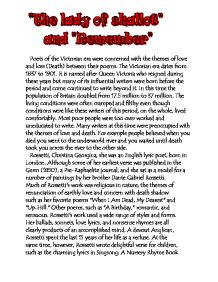 The Lady of Shallot and Remember

Poets of the Victorian era were concerned with the themes of love and loss (Death) between their poems. The Victorian era dates from 1837 to 1901. It is named after Queen Victoria who reigned during these years but many of its influential writers were born before the period and come continued to write beyond it. In this time the population of Britain doubled from 17.5 million to 37 million. The living conditions were often cramped and filthy even though conditions were like these writers of this period, on the whole, lived comfortably. Most poor people were too over worked and uneducated to write. Many writers at this time were preoccupied with the themes of love and death. For example people believed when you died you went to the underworld river and you waited until death took you across the river to the other side. Rossetti, Christina Georgina, she was an English lyric poet, born in London. Although some of her earliest verse was published in the Germ (1850), a Pre-Raphaelite journal, and she sat as a model for a number of paintings by her brother Dante Gabriel Rossetti. Much of Rossetti's work was religious in nature; the themes of renunciation of earthly love and concern with death shadow such as her favorite poems "When I Am Dead, My Dearest" and "Up-Hill." ...read more.

as the subject of her tapestries. "There she weaves by night and day a magic web with colours gay. She has heard a whisper say a curse is on her if she stay to look down to Camelot" She gets upset sometimes that she cannot be a part of life outside her window. So when the handsome knight Sir Lancelot passes by her window, she is overwhelmed by him, and forgetting the curse, she looks out the window to see him directly. When she does, the mirror breaks, and the threads of her tapestry break as well. When she goes down to the riverside and finds a boat, and on the front of the boat she writes "The Lady of Shallot". She unties the boat and lies down in it, and as she floats down the river toward Camelot, she sings a song. As the curse works it's evil magic, her blood freezes to her cold death. The boat lands on the shore of Camelot where the people of Camelot come out to see what this is, and they see that she has written her name on the front of the boat. When Sir Lancelot sees the Lady of Shallot he can't believe how beautiful she was. ...read more.

The remember poem's language is very easy to understand and the tone is very sad. It has rhyming couplets e.g. away, stay. It uses personification e.g. "gone far away into the silent land". It uses iambic pentameter- the pattern of a short syllable followed by a long syllable, repeated five times in every line. Also it is divided by its rhyme scheme into groups of 8 lines then 6 or 4,4,4 and 2 lines. It is a sonnet, which has 14 lines. William Shakespeare is one of the most famous people who wrote sonnets. Overall I enjoyed reading each poem I found them interesting but maybe the lady of shalott was a bit too long. I think the poem Remember is very sad but has a meaning to it. The meaning could be to love your loved one's and tell your love one's you love them because when you cant you will regret it. When good things have gone there is no chance of getting back what you had. The Lady of shallot portrays the themes of love and loss by using the Lady of shallot loving Sir Lancelot and then unfortunately dies and the Remember poem uses the actual poem and its words to tell you about your love ones. It tells you to remember a person when they have gone and maybe not take them for granted when they are there before they are gone. ...read more.