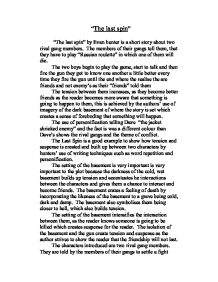 &quot;The last spin&quot; by Evan hunter is a short story about two rival gang members. The members of their gangs tell them, that they have to play &quot;Russian roulette&quot; in which one of them will die.

"The last spin" "The last spin" by Evan hunter is a short story about two rival gang members. The members of their gangs tell them, that they have to play "Russian roulette" in which one of them will die. The two boys begin to play the game, start to talk and then fire the gun they get to know one another a little better every time they fire the gun until the end where the realise the are friends and not enemy's as their "friends" told them The tension between them increases, as they become better friends as the reader becomes more aware that something is going to happen to them, this is achieved by the authors' use of imagery of the dark basement of where the story is set which creates a sense of foreboding that something will happen. The use of personification telling Dave "the jacket shrieked enemy" and the fact is was a different colour than Dave's shows the rival gangs and the theme of conflict. The Last Spin is a good example to show how tension and suspense is created and built up between two characters by hunters' use of writing techniques such as word repetition and personification. ...read more.

The author creates tension between them by only revealing facts about them bit by bit, which pulls the reader into the story and makes them want to reach the end of the story. By only including two characters in the isolated setting of the dark, damp basement, the author builds tension and creates suspense. Throughout the story we are only given clues about Dave and Tigo but the reader is not told a lot about them to tension between the characters. Dave and Tigo try to act tough "their eyes locked" but gradually they begin to trust one another and this lulls the reader into a false sense of security that there will be a happy ending Dialogue plays an important in increasing as the sentences are short and the characters are trying to out do one another "I've seen pieces before, this is nothing special". This condensed dialogue, however increases tension as the story progresses. The characters begin to lower their guard through the story and as they do their dialogue becomes friendlier and the sentence become longer, more involved, the tone is more suttle and friendly. ...read more.

Friendships and relationships are revealed by the author to show the reader that enemies can have things in common and become friends, as it says, "If we didn't do this operation we wouldn't get a chance to talk" The ending of the story is a shock to the reader but not a shock, as we know something is going to happen or someone is going to die. At the end when Dave is about to pull the trigger of the gun he says, "here's to Sunday" which means he will or will not see him on Sunday. After Dave dies Tigo cries and mourns his death which shows they were friends I think the author wanted to show that death is tragic therefore he made Daves death tragic "ripping away half of daves face". The author also wanted to build tension between Dave and Tigo through the story to create a sad ending by his use of word repetition and personification which pulls the reader into the story and yet lulls the reader into a false sense of security into a happy ending which is effective. ...read more.