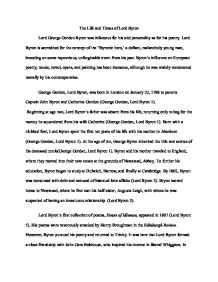 The Life and Times of Lord Byron.

Lord Byron became an adored character of London society and he spoke in the House of Lords on liberal themes, where he conducted a steamy love affair with Lady Caroline. In 1814, Byron wrote The Corsair, which sold 10,000 copies the first day of publication ("The Life of Lord Byron, 2). Lord Byron married Anne Isabella Milbanke in January of 1815, and Anne gave birth to their daughter Ada that same year ("The Life of Lord Byron", 2). The marriage was unhappy, and Anne traveled with her daughter, Ada, back to her home to live with her parents. Rumors swirled of Lord Byron's infidelity with his half-sister, Augusta Leigh, and shortly after signed the legal separation paper with Anne Milbanke. Byron moved to Venice where he met the Countess Teresa Guiccioli, who became his mistress. During this time of countless debts and continual love affairs, Lord Byron became the most famous exile in Europe. In 1816, Byron settled in Geneva with Percy Shelley, Mary Shelley, and Claire Clairmont, who became his mistress and later had an illegitimate child together ("The Life of Lord Byron", 2). ...read more.

On February 15, 1824, Byron fell ill and was ordered to be bleeded by doctors, as it was accustomed to do so in that day ("The Life of Lord Byron," 4). Byron was enable to escape the illness he contracted and on April 19, 1824, Lord Byron died ("The Life of Lord Byron," 4). He was deeply mourned by the Greeks and they praised him as though he was a hero. His body was embalmed; his heart was removed and buried in Missolonghi. Byron's remains were sent to England and placed in a vault among his ancestors near Newstead. One hundred and forty-five years later, a memorial to Lord Byron was placed on the floor of Westminster Abbey ("The Life of Lord Byron," 4). Lord Byron was a satirist whose poetry and personality captured the imagination of Europe. His major works excelled him as one of the most famous English 'Romantic' poets. Lord Byron lived a scandalous, but fascinating life journeying all over the world producing unforgettable poetry and literary works. It is best said that, "His natural gift for poetry was the only consistency in his troubled life." ?? ?? ?? ?? ...read more.