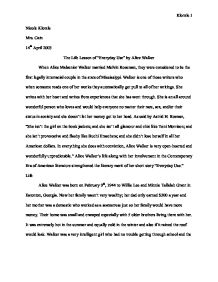 The Life Lesson of &quot;Everyday Use&quot; by Alice Walker.

Nicole Klotzle Mrs. Cain 14th April 2003 The Life Lesson of "Everyday Use" by Alice Walker When Alice Malsenior Walker married Melvin Roseman, they were considered to be the first legally interracial couple in the state of Mississippi. Walker is one of those writers who when someone reads one of her works they automatically get pull to all of her writings. She writes with her heart and writes from experiences that she has went through. She is an all around wonderful person who loves and would help everyone no matter their race, sex, and/or their status in society and she doesn't let her money get to her head. As said by Astrid H. Roemer, "She isn't the girl on the book jackets; and she isn't all glamour and chic like Toni Morrison; and she isn't provocative and flashy like Buchi Emecheta; and she didn't lose herself in all her American dollars. In everything she does with conviction, Alice Walker is very open-hearted and wonderfully unpredictable." Alice Walker's life along with her involvement in the Contemporary Era of American literature strengthened the literary merit of her short story "Everyday Use." Life Alice Walker was born on February 9th, 1944 to Willie Lee and Minnie Tallelah Grant in Eatonton, Georgia. Now her family wasn't very wealthy; her dad only earned $300 a year and her mother was a domestic who worked as a seamstress just so her family would have more money. ...read more.

Now Maggie, Dee's little sister, has scars and walks with a limp because he house burned down and she was left there and Dee wouldn't help get her get out. Well Dee made fun of her and would always say that she couldn't do anything for herself and that she would always be this way. Now she lived her life like this till the age of 14 when she went and got the "cataract" removed. This was a new beginning for Walker and she knew it. Walker was awarded a rehabilitation scholarship for handicapped students from the state of Georgia, so she moved out of her parent's home at the age of 17 to attend Spelman College, "a historically Black institution dedicated to educating African-American women." While she was at Spelman she was "an active participant in the fight for Civil Rights". Walker spoke out everywhere and got to meet important people such as John Lewis, Julian Bond and she even met Dr. Martin Luther King's wife, Coretta Scott King before she left for a World Youth Peace Festival in Finland. But walker didn't stay long at Spelman because she began to think of it as being to puritanical. She than attended Sarah Lawrence, which was mostly "an elite, white women's college" in Bronxville. Before her senior year at Sarah Lawrence Walker received a grant and decided to go to Kenya and Uganda as an exchange student. ...read more.

Merit Lastly when the reader reads "Everyday Use" the reader will see Walker use the theme of love. In "Everyday Use" it was clear the love between Maggie and her mother. In Walker's life she had a passion, a love to write and express her feelings. Also when reading Walker uses the theme of honestly. In the short story the mother told Dee that the reason she wouldn't give the quilts to her was because she didn't know the true meaning of them and Maggie did. In "Everyday Use" the quilts are a symbol of Maggie's family and Walker tries to get the reader to understand the true meaning and why they mean so much. Also the house is a symbol because it shows that no matter how poor a person is it doesn't matter because the love of someone who cares for is more important than all the money in the world. The reader will see this in her writing because Walker knows how important love for someone or something is and she portrays this love and feeling in her writing. So in conclusion Walker's experiences as a member of a poor family and with a strong sense of the Contemporary concepts have influenced the style of writing Walker used in Her short story "Everyday Use". This short story is one of the best in the Contemporary Era and Walker uses all her heart and her feelings and than she puts them in her writing and will make it the most amazing story of it kind. Klotzle 2 Klotzle 1 ...read more.