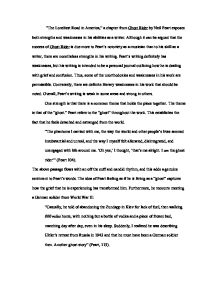 &quot;The Loneliest Road in America,&quot; a chapter from Ghost Rider by Neil Peart exposes both strengths and weaknesses in his abilities as a writer.

"The Loneliest Road in America," a chapter from Ghost Rider by Neil Peart exposes both strengths and weaknesses in his abilities as a writer. Although it can be argued that the success of Ghost Rider is due more to Peart's notoriety as a musician than to his skill as a writer, there are nonetheless strengths in his writing. Peart's writing definitely has weaknesses, but his writing is intended to be a personal journal outlining how he is dealing with grief and confusion. Thus, some of the unorthodoxies and weaknesses in his work are permissible. Conversely, there are definite literary weaknesses in his work that should be noted. Overall, Peart's writing is weak in some areas and strong in others. One strength is that there is a common theme that holds the piece together. The theme is that of the "ghost." Peart refers to the "ghost" throughout the work. This establishes the fact that he feels detached and estranged from the world. "The phantoms I carried with me, the way the world and other people's lives seemed insubstantial and unreal, and the way I myself felt alienated, disintegrated, and unengaged with life around me. ...read more.

Peart often switches his tone abruptly and this can be a bit disconcerting. For example, he changes from a relatively conversational discourse to a philosophically worded discourse: "Sometimes I couldn't even figure out why I was awake, and I could never identify what might be causing this distress - rich food, meant, alcohol, or, as I asked my journal, 'Was the abuse which caused this insult to my formerly strong constitution self-inflicted, or just the deep and constant aggravations of recent life?' (Peart 109). The question Peart poses at the end of the paragraph does not fit with the rest of the sentence. Another example of a structural weakness is when Peart quotes the Queen of Romania: "Sometimes the things dreamers do seem incomprehensible to others" (Peart 112). A few paragraphs later he rewords the quote to apply it to a jokester mechanic: "Sometimes the things jokers do seem incomprehensible to others" (Peart 113). The quote does not apply in the situation and even if it did, Peart does not explain it. In her quote, the Queen was referring to her lover and American monument builder Sam Hill. ...read more.

(And big mouths, behind me.)" (Peart 126). Peart's stinging commentary reveals his shallowness and judgmental nature and this does not endear him to the reader. It detracts from the strengths in his writing and does not really serve any purpose in his piece, other than to highlight Peart's preoccupation with and judgments of those that appear unhealthy and poor. Therefore, the superficiality and prejudice of some of Peart's observations serve as a weakness to his overall writing. In conclusion, although it can be said that Peart's success as a writer could be due more to his popularity as a musician than to his abilities as a writer, he nonetheless has some skill as a writer. He maintains the theme of the "ghost" in "The Loneliest Road in America" which adds a strength to his writing because it showcases his struggles with his own grief and the disconnection he feels from the world. Peart does however expose weaknesses in his writing, most notably in his style and structure, but also in the way he portrays himself. Overall, Peart's writing is shown to have both strengths and weaknesses, as evidenced in "The Loneliest Road in America" from Ghost Rider. ...read more.