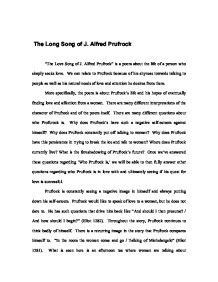 The Long Song of J. Alfred Prufrock "The Love Song of J. Alfred Prufrock" is a poem about the life of a person who simply seeks love. We can relate to Prufrock because of his shyness towards talking to people as well as his natural needs of love and attention he desires from them. More specifically, the poem is about Prufrock's life and his hopes of eventually finding love and affection from a woman. There are many different interpretations of the character of Prufrock and of the poem itself. There are many different questions about who Profurock is. Why does Prufrock's have such a negative self-esteem against himself? Why does Prufrock constantly put off talking to women? Why does Prufrock have this persistence in trying to break the ice and talk to women? Where does Prufrock currently live? What is the foreshadowing of Prufrock's future? Once we've answered these questions regarding 'Who Prufrock is,' we will be able to then fully answer other questions regarding who Prufrock is in love with and ultimately seeing if his quest for love is successful. ...read more.

Throughout the poem Prufrock is too scared to make a move because he keeps saying "there will be time" to do it later (Eliot 1281). He spends his whole life trying to become more intimate with women, but he never does because he is constantly turning his back to the opportunities. Having more time to talk to women is always on Prufrock's mind. This idea of there being more time is repeated several times throughout the poem to show us his procrastination of talking to women. Prufrock says "In a minute, there is time" (Eliot 1281). He continues to procrastinate with regards to reediting and revising his thoughts to kill time and give himself a good reason to delay what he wants to do. Profrock says "And time yet for a hundred indecisions, / And for a hundred visions and revisions" (Eliot 1281). When Prufrock does get the opportunity to become more intimate and affectionate with women, he hesitates and feels it's "Time to turn back and descend the [stairs]" (Eliot 1281). ...read more.

His living conditions may be a factor on why he is the depressed and isolated person he seems to be. Prufrock speaks of "restless nights in one-night cheap hotels / And sawdust restaurants with oyster-shells" (Eliot 1281). Finally, in fully understanding who Prufrock is, we come to see consequences of him not being able to talk to women. His destiny is that he will become an old and lonely man just because he cannot communicate his emotions with a woman. We get a sense of his future by seeing the old men in the windows; Prufrock says that he "watched the smoke that rises from the pipes / Of lonely men in shirt-sleeves, leaning out of windows?" (Eliot 1282). Prufrock feels that his life is so meaningless and short that it can be "measured out ... with coffee spoons" (Eliot 1282). But in the end, he says, "I grow old ... I grow old ... / I shall wear the bottoms of my trousers rolled" (Eliot 1283). ...read more.