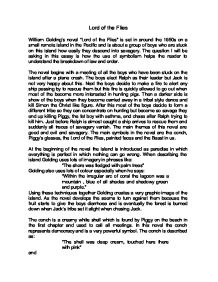 The Lord of the Flies how the use of symbolism helps the reader to understand the breakdown of law and order.

Lord of the Flies William Golding's novel "Lord of the Flies" is set in around the 1950s on a small remote island in the Pacific and is about a group of boys who are stuck on this island how easily they descend into savagery. The question I will be asking in this essay is how the use of symbolism helps the reader to understand the breakdown of law and order. The novel begins with a meeting of all the boys who have been stuck on the island after a plane crash. The boys elect Ralph as their leader but Jack is not very happy about this. Next the boys decide to make a fire to alert any ship passing by to rescue them but this fire is quickly allowed to go out when most of the become more interested in hunting pigs. Then a darker side is show of the boys when they become carried away in a tribal style dance and kill Simon the Christ like figure. ...read more.

But towards the end of the novel the conch becomes less and less powerful: "The conch lay at Ralph's feet, fragile and white." The lexus of fragile and white symbolises, in my opinion, the demise of democracy cease to exist just before Piggy is killed when the conch is smashed when law and order exist no longer. Piggy's glasses represent knowledge and insight throughout the novel. At the start of the noel they are used to light the fire showing they are essential to life and rescue. Jack can see their important as it says: "Jack snatched the glasses off his face." Showing Jack is becoming violent and that he sees that they could be used as a powerful leadership tool. Later when Piggy's glasses are half broken the first pig is killed at nearly the same time showing the breakdown in intelligence and law and order. The lord of the Flies is the head of a pig left by Jack and his hunters to the beast who is what all of the boys are afraid of. ...read more.

I think the author uses the idea of a Beast in us very well. The first of the boys to experience it is Jack: "A darker shadow crept beneath the swarthiness of his skin, but Jack noticed nothing." The Beast spreads from Jack into his choir and they all become obsessed with hunting like him. Eventually the Beast even spreads to Ralph when he joins in the beating of Robert and killing of Simon when: "The desire to squeeze and harm was over- mastering." This phrase suggests the Beast is in control of the group but as soon as the officers land on the island all evidence of a Beast is swept away and they return to innocent, crying young boys. Throughout this novel I think the author develops these symbols very well. he slowly diminishes the power of the symbols which represent democracy and knowledge and finally destroys them while he grows and heightens the power of those representing savagery until finally they take over the boys until the become savage themselves. I think symbolism is used to show us how law and order breaks down as evil cannot be stopped in all of us. Diarrhoea ...read more.

This candidate's response is fairly focused on the question proposed, which orientates around the symbolism William Golding uses in his novel 'Lord of the Flies' to represent the degradation of humanity and civilisation. The answer gets off to a very ...

This candidate's response is fairly focused on the question proposed, which orientates around the symbolism William Golding uses in his novel 'Lord of the Flies' to represent the degradation of humanity and civilisation. The answer gets off to a very clunky start, and it is here that the candidate does not gain many marks at all, as they are merely recollecting the events of the novel. Whilst it is important to demonstrate an understanding of the entire novel, it should be done with far better analytical dexterity than simply blocking it into a paragraph at the beginning of the essay. The introductory paragraph should be like a book-end, with no real analytical substance, more rather an orientation of the essay's focus. There is evidence the candidate has tried this, but the evidence they give of knowledge of the text should be integrated into the rest of the essay only where relevant (so, analysis of the conch would incorporate events regarding the conch and nothing else, to show holistic novel understanding).

The Level of Analysis is below average, and the candidate is operating at a low C/high D grade for GCSE. The reason for this low grade is because the candidate mentions a lot of things that could be analysed, but neglects to actually put in the leg-work and do it. This feature-spotting limits the essay greatly, as anyone can identify and evidence literary devices like "Golding uses lots of imagery in phrases like [example removed]", but the candidate simply does not comment on the effect of these devices. They should go on to say how the use of surreal colours and the mental image of a tranquil paradise affects the readers and what it says about the island (everything in the novel is symbolic as it is an allegorical novel, which relies heavily on symbolism to convey it's connotative messages).
There is a good identification of the transition of certain symbols before and after the degradation of society, law and order, such as with the example above, where the candidate recognises the relevance of the peacefulness of the island before it is burnt down by a fire. This gets points but as before, the effect needs to be analysed.

It is of vital importance that candidates pay attention to what they're writing, as this candidate has clearly neglected to do. A lot of what they have written contradicts itself, and there are silly mistakes made that a simple proof-read would fix: "the forest is burned down when JackÃ¢â‚¬â„¢s tribe set it alight when chasing Jack", being a prime example.