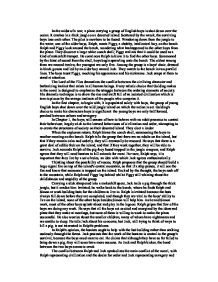 The Lord of the Flies - summary

In the midst of a war, a plane carrying a group of English boys is shot down over the ocean. It crashes in a thick jungle on a deserted island. Scattered by the wreck, the surviving boys lose each other. The pilot is nowhere to be found. Wandering down from the jungle to the water, one of the older boys, Ralph, meets Piggy, a chubby, intellectual boy, on the beach. Ralph and Piggy look around the beach, wondering what has happened to the other boys from the plane. They discover a large white conch shell; Piggy realizes that it could be used as a kind of makeshift trumpet. He convinces Ralph to blow it to find the other boys. Summoned by the blast of sound from the shell, boys begin sprawling onto the beach. The oldest among them are around twelve; the youngest are only five. Among the group is a boys' choir, dressed in black gowns and led by an older boy named Jack. They march to the beach in two parallel lines. The boys taunt Piggy, mocking his appearance and his nickname. Jack snaps at them to stand at attention. The Lord of the Flies dramatizes the conflict between the civilizing character and barbarizing instinct that exists in all human beings. Every artistic choice that Golding makes in the novel is designed to emphasize the struggle between the ordering elements of society. His dramatic technique is to show the rise and swift fall of an isolated civilisation which is torn to pieces by the savage instincts of the people who comprise it. In the first chapter, to begin with, it is populated solely with boys, the group of young English boys shot down over the wild jungle island on which the action is set. Golding's choice to make his characters boys is significant: the young boys are only half formed, perched between culture and savagery. ...read more.

Jack manipulates the boys' fear of the beast, hinting that it exists when he knows that it probably does not. This is one source of his power, but another explanation for his charisma is that he enables the boys to act as the beast-to express the instinct for savagery that civilization has previously held in check. Because that instinct is natural and present within each human being, Golding asserts that we are all capable of becoming the beast. This notion will take on symbolic clarity later in the book, when the other boys, mistaking Simon for the beast, fall upon him and kill him like animals, with their bare hands and teeth. 6 Summary In the darkness late that night, Ralph and Simon carry the littluns back to the shelter before going to sleep. As the boys sleep, military airplanes battle fiercely above the island. Yet none of the boys see the explosions and flashes in the clouds, because Sam and Eric, who were supposed to watch the signal fire, have fallen asleep. A dead parachutist drifts down from the sky onto the island; his chute becomes tangled in some rocks and flaps in the wind, while his shape casts fearful shadows on the ground. His body is covered up by the parachute, but his head seems to rise and fall in the wind. When Sam and Eric awake, they tend to the fire to make the flames brighter. In the flickering firelight, they see the twisted form of the dead parachutist. They mistake the shadowy image for the figure of the dreaded beast and rush back to the camp, claiming breathlessly that they have been attacked by the beast. They wake Ralph and tell him what they have seen. Ralph immediately calls for a meeting, at which the twins reiterate their claim of having been assaulted by a monster. The boys, electrified and horrified by their claims, organize an expedition to search the island for monsters. ...read more.

Ralph's exhilaration in the hunt and his participation in the ritual that nearly kills Robert is, in a sense, a major victory for Jack, since the experience shakes Ralph's confidence in the primacy of his civilized, moral ideals. As befits a power struggle in a savage group, the conflict between the boys manifests itself not as a competition to prove who would be the better leader but as a competition of sheer strength and courage. Just as Ralph went boldly into the dark caves alone to prove his bravery in the previous chapter, Jack goes up the mountain alone now. (It is also significant that Ralph discovers nothing, while Jack discovers what he thinks is the beast: Ralph does not believe in the beast, while it forms a major part of Jack's attitude toward life on the island.) Additionally, Jack gains leverage within the group by using the competition in bravery to force Ralph to commit unwise acts of leadership, such as his decision to go up the mountainside at night. Ralph realizes that it is foolish to hunt the beast at night, but, in a society based on strength, he cannot risk appearing to be a coward. In this way, Jack manages to weaken Ralph's position in the group. Tellingly, Ralph's decision to explore the mountain at night means that he loses the opportunity to prove to everyone that Sam and Eric did not see the beast. Had the boys climbed the mountain in the daylight, they would have seen the dead parachutist for what it was; because they go at night, they see it distorted by shadows and believe that they are seeing the beast. In this way, each boy is prone to see the beast to the exact extent that he gives in to the demands of savagery, strengthening the idea that the beast is a symbolic manifestation of the boys' primitive inner instincts. ...read more.