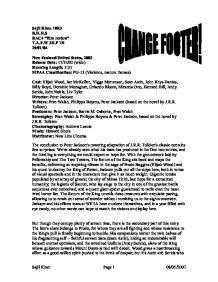 The Lord of the Rings - review.

Serkis has long been a talking point for these films, but his CGI-rendered Gollum remains no less irresistible here as the better angels of his nature give way to blackest wickedness. Yet we never lose sight of the tragedy at Gollum's core. The film's opening features an effects-free Serkis planning his character's slow plunge into monstrosity, and he retains our pity even as he plots a horrifying end for Frodo and Sam. Together, the two actors skilfully represent the battle for Frodo's soul, punctuated by fierce spoken confrontations that give voice to The Return of the King's most important staged conceits. The fiery conclusion to their struggle (perfectly realized from Tolkien's text) stands as one of the great moments in modern storytelling. The only cloud in the middle of all of this is the absence of Christopher Lee, who is the wicked Saruman deserves at least a curtain call (as does his servant Grima Wormtongue, played by Brad Dourif). Presumably, they'll make an appearance in the extended DVD, but that's no reason to leave them out here. ...read more.

Leaving Middle Earth, Jackson is now headed for Skull Island and a remake of King Kong that already has me excited. He has not ruled out a return to this fantasy world - he would like to make The Hobbit with some of the same actors, if the complicated rights issues surrounding the prequel can be straightened out. In the meantime, he has given us a trilogy of films to savour and remember. The Lord of the Rings will go down in cinematic lore as a milestone. It has legitimatized fantasy like no other production and has shown that it is possible for studio executives to realize huge gains when taking huge risks. (Had The Lord of the Rings failed, New Line Cinema would have gone down with it.) History will show the importance of The Lord of the Rings. The present illustrates its broad appeal and undeniable critical and commercial success. For many, the release of The Return of the King is the event of the year. Sajil Khan Page 1 08/05/2007 ...read more.