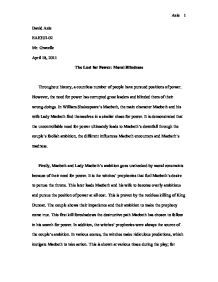 The Lust for Power: Moral Blindness. It is demonstrated that the uncontrollable need for power ultimately leads to Macbeths downfall through the couples foolish ambition

David Aziz EAE3UI-02 Mr. Gravelle April 18, 2011 The Lust for Power: Moral Blindness Throughout history, a countless number of people have pursued positions of power. However, the need for power has corrupted great leaders and blinded them of their wrong-doings. In William Shakespeare's Macbeth, the main character Macbeth and his wife Lady Macbeth find themselves in a similar chase for power. It is demonstrated that the uncontrollable need for power ultimately leads to Macbeth's downfall through the couple's foolish ambition, the different influences Macbeth encounters and Macbeth's madness. Firstly, Macbeth and Lady Macbeth's ambition goes unchecked by moral constraints because of their need for power. It is the witches' prophecies that fuel Macbeth's desire to peruse the throne. This later leads Macbeth and his wife to become overly ambitious and pursue the position of power at all cost. This is proven by the reckless killing of King Duncan. The couple shows their impatience and their ambition to make the prophecy come true. This first kill foreshadows the destructive path Macbeth has chosen to follow in his search for power. In addition, the witches' prophecies were always the source of the couple's ambition. In various scenes, the witches make ridiculous predictions, which instigate Macbeth to take action. This is shown at various times during the play; for instance, it is made evident when Macbeth attempts to kill Fleance. ...read more.

This is demonstrated when Lady Macbeth says "Glamis thou art, and Cawdor; and shalt be. What thou art promised. Yet do I fear thy nature. It is too full o' th' milk of human kindness". (Shakespeare, I.v.4-6) She believes that Macbeth's kind nature will prevent him from taking action. For this reason, she influences him greatly into murdering the king. Lady Macbeth is clearly willing to do everything necessary to seize the throne. Furthermore, his wife influences him yet again with comments that question his courage and his masculinity. She is displeased with his cowardice and believes that her husband is being indecisive and weak. This is proven when she says "Come to my woman's breasts, and take my milk for gall, you murdering ministers, wherever in your sightless substances. You wait on nature's mischief. (Shakespeare I.v.49-52) In this speech, Lady Macbeth expresses her wishes to be a man as her femininity impedes her from performing cruel actions. However, knowing that it was not a possibility, she wanted Macbeth to overcome his fear and go through with their plan. With this influence and manipulation to peruse power, Macbeth's mind becomes corrupted. It is clear that his actions became illogical which ultimately lead to his downfall. Moreover, Macbeth is influenced by his need to stay in power. ...read more.

For instance, the armed head was a symbol of his future, the bloody child represented that no man born from a woman would harm him and the crowned child holding a tree was a sign of Malcolm with his camouflage. These apparitions were clearly absurd and they represent the true turning point for Macbeth's loss of control. From that point on, with Macbeth's mind completely corrupted, it was sure that his reign as king was quickly coming to an end. Likewise, because of the witches, Macbeth believes he is invincible. It is this prediction that leads Macbeth to this way of thinking "Fear not Macbeth; no man born of a women shall ever have power upon thee." (Shakespeare V.iii.4-5) This prediction makes Macbeth delusional in thinking that he is invincible; this later leads him to take on the entire British army. That was Macbeth's last delusional action as he was killed by Macduff shortly after. In short, Macbeth's loss of control demonstrates that his mind is corrupted, which leads him to his death. In conclusion, the actions committed by Macbeth in order to obtain a position of power are those of a corrupted mind and they lead to Macbeth's tragic ending. His corruption is shown through Macbeth and Lady Macbeth's ambition, the many influences he encountered and through his madness. It remains to be seen whether or not Macbeth would have acted differently had his wife been less keen on becoming Queen. ?? ?? ?? ?? 1 Aziz ...read more.