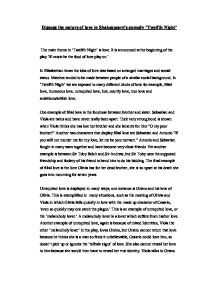 The main theme in 'Twelfth Night' is love

Discuss the nature of love in Shakespeare's comedy 'Twelfth Night' The main theme in 'Twelfth Night' is love. It is announced at the beginning of the play 'If music be the food of love play on.' In Elizabethan times the idea of love was based on arranged marriages and social status. Matches tended to be made between people of a similar social background. In 'Twelfth Night' we are exposed to many different kinds of love for example, filial love, humorous love, unrequited love, lust, courtly love, true love and ambitious/selfish love. One example of filial love is the fondness between brother and sister. Sebastian and Viola are twins and have never really been apart. Their very strong bond is shown when Viola thinks she has lost her brother and she laments for him "O my poor brother!" Another two characters that display filial love are Sebastian and Antonio "If you will not murder me for my love, let me be your servant." Antonio and Sebastian fought in many wars together and have become very close friends. ...read more.

His lack of intelligence is exploited by Sir Toby Belch, he persuades Sir Andrew to continue in his task of wooing after even after he tries to go home as he thinks the task is fruitless. Sir Toby wishes for Sir Andrew to marry Olivia, as living in a very paternal society, it was common practice for the husband to have ownership of all of his wife's belongings. This would secure Sir Andrew in Olivia's household, as Sir Andrew is Sir Toby's friend. Sir Toby also able to make Sir Andrew do what he wants which means he will ultimately be the most powerful person in Olivia's household. There are some references to Greek Mythology in most of Shakespeare's plays. This is also true in 'Twelfth Night,' "I thank you Jove" Jove is a God associated in Greek Mythology with exploiting love. The other reference to Greek Mythology is Sir Toby calls Maria "Penthesilea" who is the queen of the Amazons and known to be very beautiful. The reason Shakespeare makes so many links with Greek mythology is because they are much romanticized stories, and they are timeless and have lasted forever. ...read more.

When she says "to bed" in her letter he thinks that she wants to sleep with him. He also wishes to give Sir Toby an ultimatum, in which is to either give up drinking or to leave the house "I will wash off gross acquaintance." This is a display of Malvolio's Puritanism where he thinks he is better and purer than everyone else. Another similarity to 'Much Ado About Nothing' is that Malvolio is tricked in a similar way to how Benedict and Beatrice are tricked. The outcomes are very different, the first is a happy ending for the couple, where as Malvolio is thought to be mad and locked up. Traditionally in a Shakespearian comedy all the "loose ends" are 'tied' up at the end and this is where the last type of love to be displayed, true love. All the characters that are meant to end up together do, so Olivia with Sebastian, Orsino with Viola and Sir Toby with Maria. Shakespeare's plays have remained popular because of his extensive use of imagery and language he uses and his themes, especially with the theme of love which is identifiable by all in every age. ...read more.