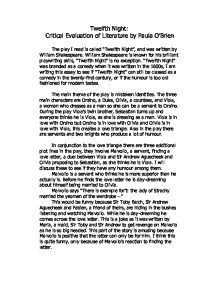 The main theme of the play is mistaken identities. The three main characters are Orsino, a Duke, Olivia, a countess, and Viola, a woman who dresses as a man so she can be a servant to Orsino

Twelfth Night: Critical Evaluation of Literature by Paula O'Brien The play I read is called "Twelfth Night", and was written by William Shakespeare. William Shakespeare is known for his brilliant playwriting skills, "Twelfth Night" is no exception. "Twelfth Night" was branded as a comedy when it was written in the 1600s, I am writing this essay to see if "Twelfth Night" can still be classed as a comedy in the twenty-first century, or if the humour is too old fashioned for modern tastes. The main theme of the play is mistaken identities. The three main characters are Orsino, a Duke, Olivia, a countess, and Viola, a woman who dresses as a man so she can be a servant to Orsino. During the play Viola's twin brother, Sebastian turns up and everyone thinks he is Viola, as she is dressing as a man. Viola is in love with Orsino but Orsino is in love with Olivia and Olivia is in love with Viola, this creates a love triangle. Also in the play there are servants and two knights who produce a lot of humour. In conjunction to the love triangle there are three additional plot lines in the play, they involve Malvolio, a servant, finding a love letter, a duel between Viola and Sir Andrew Aguecheek and Olivia proposing to Sebastian, as she thinks he is Viola. ...read more.

Sir Toby says "(Aside) I'll ride your horse as well as I ride you." Sir Toby gets the horse but does not stop the duel, he is about to when some guards come. I think Sir Toby should have stopped the duel sooner or not taken the horse as he did not stop the fight, he is never that nice to Sir Andrew. The last amusing plot is when Olivia proposes to Sebastian. Olivia gets mixed up when she is proposing marriage, she thinks Sebastian is Viola as they are twins. I think Olivia is a bit unsure about her feelings as she said earlier in the play that she would not love any man as much as she loved her brother, who died. At the start of the play she said she was going to wear a veil when she was in public and mourn for seven years because her brother died. However, after only a few days she had given up that promise then proposed to Sebastian/Viola. I did not find this funny but I think it could be funny to some people because of how insecure she was about her feelings for her brother and Sebastian/Viola. Olivia says "Even so quickly may one catch the plague? Methinks I feel this youth's perfections with an invisible and subtle stealth..." ...read more.

Sir Toby says "I'll make the motion... (Aside) I'll ride your horse aswell as I ride you." Sir Toby also makes fun of Malvolio, a lot. Malvolio says "is there no respect of place, persons nor time in you?" Sir Toby says "We did keep timer, Sir, in our catch, sneak up!" Sir Toby is hardly ever laughed at, unlike Sir Andrew and Malvolio, he is normally making fun of someone else, and because of this I think he will still be funny today but not to be laughed at but because his jokes are humorous. The last area of the play I am going to discuss is the language and jokes. All of the characters have comical moments in the play, but I think Feste, the jester/clown, and Sir Toby set up most of the puns and Elizabethan jokes. One of the puns Feste mentions is; Viola says "Do thou live by thy tabor?" Feste says "No, sir, I live by the church?" I think this is quite funny, but as the joke was about something in Elizabethan times I did not understand it at first, so the humour was taken away slightly as it had to be explained. Fabian says "hang like an icicle or a Dutchman's beard" Olivia's cold indifference is compared to a voyage made to the arctic by, Dutchman, William Barents. Sir Andrew says "I had a life be a Brownist as a politician." Sir Andrew was stating follower of a puritan, Robert Brown. ...read more.