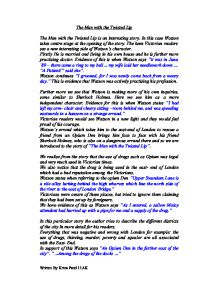 The Man with the Twisted Lip - short summary

The Man with the Twisted Lip The Man with the Twisted Lip is an interesting story. In this case Watson takes centre stage at the opening of the story. The keen Victorian readers see a new interesting side of Watson's character. Firstly He is married and living in his own house and he is further more practising doctor. Evidence of this is when Watson says "it was in June, `89 - there came a ring to my bell... my wife laid her needlework down ... "A Patient!" said she". Watson continues "I groaned, for I was newly come back from a weary day." This is evidence that Watson was actively practising his profession. Further more we see that Watson is making more of his own inquiries, some similar to Sherlock Holmes. Here we see him as a more independent character. Evidence for this is when Watson states "I had left my arm- chair and cheery sitting -room behind me, and was speeding eastwards in a hansom on a strange errand." Victorian readers would see Watson in a new light and they would feel proud of his courage. Watson's errand which takes him to the east-end of London to rescue a friend from an Opium Den brings him face to face with his friend Sherlock Holmes, who is also on a dangerous errand there and so we are introduced to the story of "The Man with the Twisted Lip". ...read more.

This time Sherlock Holmes himself speaks of the person who runs the Opium Den as the "Rascally Lascar". Again Holmes refers to this person in charge of the Den as "This Lascar scoundrel... aided by a Dane." Again these are foreigners seen in a bad light. Sherlock Holmes continues to describe these people involved in the drugs game and the suspected murder of Neville St Clair "And now as to the villains who seemed to be immediately implicated in the matter. The lascar was known to be a man of the vilest antecedents." These views of the foreigners as evil people would have fitted easily into the Victorian view of the world, as they needed to control and change the world through the empire. There is a clear contrast between the rich villas of the St Clair Family in the suburbs of London compared to the vile alleys of east London. The area around the Opium Den and east London is described as sombre, dark, badly lit place which reflects on its poverty. In contrast we find that the home of the St Clair family is described as well lit, bright and inviting. Watson States "As we entered a well -lit dining -room , upon the table of which a cold supper had been laid out." Further impression of the richness of St Clair family is underlined by the writer when he says "As we approached the door flew open, and a little blonde women stood in the ...read more.

His wife feels comfortable in making these remarks which are out of character with the Victorian period. The other woman who is depicted in this story is Mrs St Clair whose husband disappears in suspicious circumstances and who even Holmes thinks he may be dead. Yet we see she is a quite confident woman who does not give up easily. She is not afraid to ask Sherlock Holmes directly if her husbands dead or not. She says "I should very much like to ask you one or twp plain questions, to which I beg that you will give a plain answer." Further evidence of the strength of her character is underlined when she says "Do not trouble about my feelings. I am not hysterical, nor given to fainting, I simply wish to hear your real, real opinion." At this stage she had received a letter from her husband who may have given her hope and courage. Never the less she comes across as a strong willed self confident and clear minded person. In conclusion the story deals with the poverty of lower classes in the east-end. They further highlight the Opium Dens and drug taking which was introduced to London by immigrants. It gives a glimpse of the new emerging rich in the suburbs. We also see in this story a different aspect of Watson's life being depicted. We find Watson's circumstances have changed. Now he is a married man carrying out his own practise in medicine and involving himself like Holmes in solving problems. Written By Krina Patel 11AK ...read more.