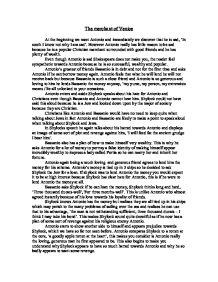 The merchant of Venice.

The merchant of Venice At the beginning we meet Antonio and immediately we discover that he is sad, 'In sooth I know not why I am sad'. However Antonio really has little reason to be sad because he is a popular Christian merchant surrounded with good friends and he has plenty of wealth. Even though Antonio is sad Shakespeare does not make you, the reader feel sympathetic towards Antonio because he is so successful, wealthy and popular. Antonio's greatest of friends Bassanio is in debt and not for the first time and asks Antonio if he can borrow money again. Antonio feels that what he will lend he will not receive back but because Bassanio is such a close friend and Antonio is so generous and loving to him he lends Bassanio the money anyway, 'my purse, my person, my extremists means / lie all unlocked to your occasions. Antonio enters and aside Shylock speaks about his hate for Antonio and Christians even though Bassanio and Antonio cannot hear him. Shylock could not have said this aloud because he is a Jew and looked down upon by the major of society because they are Christian. Christians like Antonio and Bassanio would have no need to keep quite when talking about Jews in fact Antonio and Bassanio are likely to make a point to speak aloud when talking about Shylock and Jews. In Shylocks speech he again talks about his hatred towards Antonio and displays an image of some sort of plot and revenge against him, 'I will feed fat the ancient grudge I bear him'. ...read more.

Shylock also talks about Antonio in a way he would never before. He calls Antonio a coward which he would never at first because of the repercussions but now Shylock has his bond and a plot of revenge. Shylock is now becoming obsessed with revenge, not for money or respect or even to teach Christians a lesson but for only his own pleasure, 'if it will feed nothing else, it will feed my revenge'. Shylock reminds himself of his precious jewels that Jessica stole, he then admits he would rather Jessica were dead if he got his jewels back, 'I would rather my daughter were dead at my foot, and thy jewels in her ear'. This shows how Shylocks priorities have soon changed by circumstances and by his sick thoughts of revenge. Shylock does not see wrong in his revenge, he feels he is a person and has the right like any other person or Christian to enact revenge however cruel it may be, 'if you prick us do we not bleed? If you tickle us to we not laugh? If you do not poison us do we not die? And if you wrong us shall we not revenge?'. Shylock has now made it clear he no longer wants the repayment of 3 thousand ducats but would much rather prefer a pound of flesh from Antonio. This is strange because Shylocks first priority was his money now it has become clear it is revenge and he blames Antonio for everything that has gone wrong in his life. ...read more.

Shylock is confused but understands his mistake. His obsession with his bond disappears and his businessman like state re appears asking for his bond paid three times open as he knows he cannot take a pound of flesh with drawing blood. Gratiano offers the money instantly however Portia says no he will have his penalty of a pound in flesh. Shylock now wants to forgive and forget as things are turning round on him. Portia does not let him leave and tells him what is going to be done. Shylock is to give half of his money to Antonio and half to the state which will consist mainly of Christians. He must also forget about being a Jew and become a Christian. Sympathy is felt towards Shylock because he has lost everything. His money, daughter and religion to Christians. Shylock now has to become Christian, which is against all his former beliefs. Christians will now never accept him as a Christian who he will become and his Jew friends will also dismiss him because of being a traitor to his religion. Shylock has lost everything and some could argue he deserved it, however sympathy is still created for him. In the end Antonio begins where he started from and all the Christians are happy. Shylock is the only the person left with nothing. Shakespeare gives some sympathy to Shylock even though you are unsure he deserves it due to the way he has been acting. Antonio has been let off lightly and should of learnt some valuable lessons. By Rory Bradley ...read more.