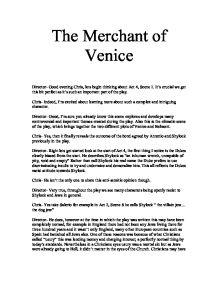 The Merchant of Venice Director- Good evening Chris, lets begin thinking about Act 4, Scene 1. It's crucial we get this bit perfect as it's such an important part of the play. Chris- Indeed, I'm excited about learning more about such a complex and intriguing character. Director- Good, I'm sure you already know this scene explores and develops many controversial and important themes created during the play. Also this is the climatic scene of the play, which brings together the two different plots of Venice and Belmont. Chris- Yes, then it finally reveals the outcome of the bond agreed by Antonio and Shylock previously in the play. Director- Right lets get started look at the start of Act 4, the first thing I notice is the Dukes clearly biased from the start. He describes Shylock as "an inhuman wretch, uncapable of pity, void and empty" Rather than call Shylock his real name the Duke prefers to use discriminating insults to try and undermine and demoralize him. This all reflects the Dukes racist attitude towards Shylock. Chris- He isn't the only one to share this anti-semitic opinion though. Director- Very true, throughout the play we see many characters being openly racist to Shylock and Jews in general. Chris- Yes take Salerio for example in Act 2, Scene 8 he calls Shylock " the villain jew... the dog jew" Director- He does, however at the time in which the play was written this may have been completely normal, for example in England there had not been any Jews living there for three hundred years and it wasn't only England, many other European countries such as Spain had banished all Jews also. One of these reasons was because of what Christians called "usury" this was lending money and charging interest; a perfectly normal thing by today's standards. Nevertheless in a Christians eyes usury was a mortal sin but as Jews were already going to Hell, it didn't matter in the eyes of the Church. ...read more.

He doesn't even know what he's done wrong and thinks Shylock is probably doing this just because he's jealous of him. Chris- After that the Duke begins to talk about mercy showing some Christian teachings. He asks Shylock "How shalt thou hope for mercy, rendering none?" Director- Yes and Shylock's response to this is to attack the hypocrisy of Venetian Christians, he talks about them keeping Slaves and compares their slaves to his bond. "You have among many a purchased slave...shall I say to you, Let them be free...You will answer 'The slaves are ours'; so I demand of him Is dearly bought, 'tis mine and I will have it." I think Shylock is trying to say that having his bond is no worse than owning slaves. He may have included this because members of the audience at he time may have owned slaves and brings up an important moral debate of whether slavery is right or wrong. This would'nt have been to controversial at the time as slavery was not really introduced until a while after the play, he might have been trying to stop slavery before it happend by trying to make people at the time see it as morally wrong. Chris- Yes, I also notice that despite everyone in the courtroom is attacking Shylock he's still very confident of getting his bond. Director- Indeed Shylock believes in a law without mercy. He follows the Old Testament saying "an eye for an eye, a tooth for a tooth." But is this justice or revenge? What do you think? Chris- I don't know although I'm quite certain Shylock would have seen what he was doing as quite justifiable. This does though illuminate fundamental differences between the Old Testament followed by Jewish people and the new. Jesus' taught mercy he claimed people should turn the other cheek, rather than seek revenge. Shylock represents a type of law that does not allow mercy which follows the teachings of the Old Testament, which seem to dissociate justice and mercy. ...read more.

But is this mercy, after all he has given Shylock the opportunity to gain some of his wealth back. Director- I don't believe it is, Antonio knows that Shylock thinks becoming a Christian will mean him going to hell and after what he was put through by Shylock before I very much doubt Antonio was trying to be merciful. Chris- Yes, but in Antonio's eyes Shylocks going to hell for being a Jew, maybe he is showing mercy by trying to save his soul? Director- Yes Portia however seems to gloat at Shylocks misfortune and does not seem to show mercy in the slightest. Chris- Shylock isn't just a simple villain with a one track mind like many people think, he's a very complex and misunderstood character. Throughout the play the way in which the audience react and view him as a person with him changes, I'm sure you recognize this. What do you think Shakespeare is trying to say about Shylock. Director- I don't believe Shakespeare shared the same anti-semitic views that most people had at that time, In parts of the play he tried to show Shylock in a good light and as in some ways as much a victim in all this as Antonio. Maybe he was trying to open the mind of his audience to less racist views but without trying to do it too controversially as he still showed Shylock at many parts of the play as the stereotypical villain Jew, who was after all partly responsible for the position in which he found himself. Chris- Yes I completely agree, I think when staging this in order to create a intimate relationship between the audience and characters we should use a thrust stage, like Shakespeare would have done. Director- Great idea, It's getting on now so we shall continue this discussion tomorrow, you don't have any questions that need answering do you? Chris- Nothing that can wait for tomorrow, I will see at the playhouse at 10:00 as usual. Good night. Director- Good night Chris ...read more.