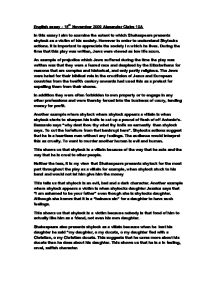 The merchant of venice

English essay - 18th November 2009 Alexander Claire 10A In this essay I aim to examine the extent to which Shakespeare presents shylock as a victim of his society. However in order to understand Shylocks actions. It is important to appreciate the society in which he lives. During the time that this play was written, Jews were viewed as low life scum. An example of prejudice which Jews suffered during the time the play was written was that they were a feared race and despised by the Elizabethans for reasons that are complex and historical, and only partly religious. The Jews were hated for their biblical role in the crucifixion of Jesus and European countries from the twelfth century onwards had used this as a pretext for expelling them from their shores. ...read more.

shylock stuck to his band and would not let him give him the money This tells us that shylock is an evil, bad and a dark character. Another example where shylock appears a victim is when shylocks daughter Jessica says that "I am ashamed to be your father" even though she is shylocks daughter. Although she knows that it is a "heinous sin" for a daughter to have such feelings. This shows us that shylock is a victim because nobody is that fond of him to actually like him as a friend, not even his own daughter. Shakespeare also presents shylock as a villain because when he lost his daughter he said "my daughter, o my ducats, o my daughter fled with a Christian, o my Christian ducats. ...read more.

This quote tells us that shylock as a Jew. And Christians think that they are a dirty, ugly, dark and evil race. In addition shylock is portrayed as a victim when he finds out that his daughter had gone missing. This is shown by Shakespeare making him seen like a victim because he had lost his daughter and he wants the audience to feel sorry for him even though he is a Jew. In conclusion, I have shown that Shakespeare portrays shylock as a victim and also a villain because he does something that makes people sorry for him. Like him losing his daughter and also he is portrayed as a villain because he cared more about his ducats then he did about his daughter when his daughter went missing. Finally, this play still has relevance today because it shows us how people can be victims and villains at the same time and how evil and cruel people can be towards each other. ...read more.