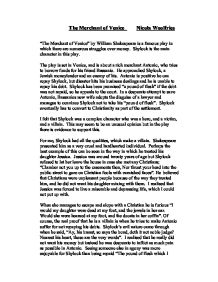 The Merchant of Venice Nicola Woolfries "The Merchant of Venice" by William Shakespeare is a famous play in which there are numerous struggles over money. Shylock is the main character in this play. The play is set in Venice, and is about a rich merchant Antonio, who tries to borrow funds for his friend Bassanio. He approached Shylock, a Jewish moneylender and an enemy of his. Antonio is positive he can repay Shylock, but disaster hits his business dealings and he is unable to repay his debt. Shylock has been promised "a pound of flesh" if the debt was not repaid, so he appeals to the court. In a desperate attempt to save Antonio, Bassanios new wife adopts the disguise of a lawyer and manages to convince Shylock not to take his "pound of flesh". Shylock eventually has to convert to Christianity as part of the settlement. I felt that Shylock was a complex character who was a hero, and a victim, and a villain. ...read more.

Of course, the real proof that he is a villain is when he tries to make Antonio suffer for not repaying his debts. Shylock's evil nature came through when he said, "Ay, his breast, so says the bond, doth it not noble judge? Nearest his heart, those are the very words". I realised that he really did not want his money but instead he was desperate to inflict as much pain as possible in Antonio. Seeing someone else in agony was more enjoyable for Shylock than being repaid "The pound of flesh which I demand is dearly bought, tis mine and I will have it". At this point in the play I absolutely despised Shyloch for being such a villain. However, even though he was a villain I felt that Shylock was also a bit of a victim. From the opening moment it was obvious that Antonio hated him simply because he was not a Christian like himself and lent out money to make a profit. ...read more.

I admired Shylock and the way he cared for his family; he did what he thought was best for his daughter Jessica. He was trying to protect Jessica from the Christians because of the way they had treated him in the past "Fair sir, you spat on me on Wednesday last." Shylock also treated his daughter wrongly, Jessica even felt that he was no longer her father. "To ashamed to be my fathers child." However he had her interest at heart. In the play Shylock could be seen as heroic when he took Antonio to court. Shylock was a man of principles and he always followed the letter of the law. However, Shylock could also have been considered as being cunning and vengeful. A clear example of this is when Antonio offered Shylock double the amount due, but Shylock rejected it. Shylock insisted upon receiving his "pound of flesh", and actually he wanted Antonio dead. In view of all of Shylock' s characteristics, my overall opinion of Shylock is that he is a very complicated man. It was a very enjoyable play to read, and I am certain to remember Shylock in the years to come. ...read more.