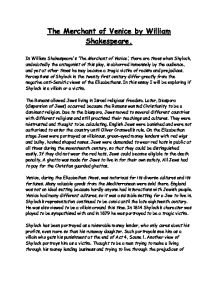 The Merchant of Venice by William Shakespeare. In William Shakespeare's 'The Merchant of Venice', there are times when Shylock, undoubtedly the antagonist of this play, is abhorred immensely by the audience, and yet at other times he may become a tragic victim of racism and prejudices. Perceptions of Shylock in the twenty first century differ greatly from the negative anti-Semitic views of the Elizabethans. In this essay I will be exploring if Shylock is a villain or a victim. The Romans allowed Jews living in Israel religious freedom. Later, Diaspora (dispersion of Jews) occurred because the Romans wanted Christianity to be a dominant religion. Due to the Diaspora, Jews moved to several different countries with different religions and still practised their teachings and cultures. They were mistrusted and thought to be calculating. English Jews were banished and were not authorised to enter the country until Oliver Cromwell's rule. On the Elizabethan stage Jews were portrayed as villainous, green-eyed money lenders with red wigs and bulky, hooked shaped noses. Jews were demanded to wear red hats in public at all times during the seventeenth century, so that they could be distinguished easily. If they did not wear the red hats, Jews could become eligible to the death penalty. A ghetto was made for Jews to live in for their own safety. All Jews had to pay for the Christian guarded ghettos. Venice, during the Elizabethan times, was notorious for its diverse cultures and its fortunes. ...read more.

Shylock is arguing that he is not different from the Christian characters. Although he ends the speech with a tone for retribution 'if you wrong us, shall we not revenge?' Shylock also points out that he has been taught the need for revenge through the examples of the Christian characters 'If a Christian wrong a Jew, what should his sufferance be by Christian example? Why, revenge! The villainy you teach me I will execute. It will go hard, but I will better the instruction.' In Act 1 Scene 3, Lines 33-43: Shylock explains to the audience about why he dislikes Antonio. 'He lends out money' without interest and 'brings down the rate of usance'. Shylock says 'I will feed fat the ancient grudge I bear him.' which means he will get revenge. He also says that Antonio 'hates our sacred nation, and he rails' meaning Antonio criticises Jews. He also adds that all Jews will be cursed 'if I forgive him!'. Shylock also speaks of an 'ancient grudge' when he first enters 'The Merchant of Venice' and retells a memory of Antonio's horrible actions. Act 1 scene 3 lines 98-121.Shylock shows his intentions right from the beginning, if Antonio does not pay the loan in three months, Shylock will receive 'an equal pound, Of your fair flesh, to be cut off and taken' from Antonio. We feel sympathy for Shylock, as he has experienced prejudice by the hands of Antonio and this makes his desire to get revenge even stronger. ...read more.

When Portia arrived and turned the tables to Antonio's advantage, the result is of an extremely content ending, especially to an Elizabethan audience. Antonio has prevailed and Shylock must abandon his religion and become a Christian. The fact that the trial was such a close call and was twisted easily in favour of the Christians, however, raises the issue on how the law can be misused and unfair. Shylock's life is emancipated, but his capability to practice his profession and his religion has been taken away. Ultimately, Shylock has lost his daughter, his fortune, his servant and a treasured ring given to him by Leah. He will give up his estate to Lorenzo, the man responsible for stealing his daughter, and he will renounce his religion for Christianity, which prohibits him from engaging in money-lending, by which he earns his living. Modern audiences cannot help but view Shylock as a victim. We can only guess and will never found out, in the way, which Shakespeare intended Shylock to be portrayed. The Elizabethan audience had adopted a much shallow view that the Christians were always right, so Shylock was always at fault. Shylock was created to challenge the anti-Semitic and prejudices of the Elizabethan audience. Despite Shylock being a character that is tormented, he is also a tormentor, so it is difficult to choose how he should be viewed. It is purely up to the audience to detect if he should be viewed with pity or with disdain. Shakespeare's description of Shylock, a usurer, has left many people wondering what Shakespeare really wanted us to feel towards Shylock : compassion, detestation or even both. ?? ?? ?? ?? ...read more.