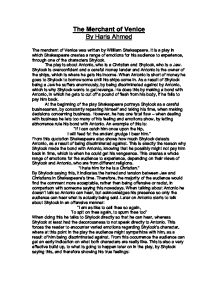 The Merchant of Venice By Haris Ahmed The merchant of Venice was written by Willliam Shakespeare. It is a play in which Shakespeare creates a range of emotions for his audience to experience, through one of the characters Shylock. The play is about Antonio, who is a Christian and Shylock, who is a Jew. Shylock is overconfident and a careful money lender and Antonio is the owner of the ships, which is where he gets his income. When Antonio is short of money he goes to Shylock to borrow some until his ships come in. As a result of Shylock being a Jew he suffers enormously, by being discriminated against by Antonio, which is why Shylock wants to get revenge. He does this by making a bond with Antonio, in which he gets to cut off a pound of flesh from his body, if he fails to pay him back. At the beginning of the play Shakespeare portrays Shylock as a careful businessman, by constantly repeating himself and taking his time, when making decisions concerning business. However, he has one fatal flaw - when dealing with business he lets too many of his feeling and emotions show, by letting abhorrence rule his bond with Antonio. ...read more.

Shylock is basically saying that Launcelot sleeps and snores far too much, on the other hand Launcelot thinks he does not get fed adequately. Launcelot also says: "Master Bassanio...gives rare new liveries." This shows that Launcelot perceives Shylock as a poor employer, while Bassanio is willing to provide him with a new uniform. This is one of the many reasons why Launcelot wants to leave Shylock to work for Bassanio. On the other hand Shylock says that Launcelot, "...rend apparel out..." In other words he ruins the uniform he already has which is why he refuses to replace it with a new one. This forces the audience to favour Shylock rather than Launcelot. I thought Launcelot was being very ungrateful for what he received from Shylock, such as a uniform which he did not take care of. By making the audience think that he did not have an adequate enough uniform to wear, when he was the one who did not take care of it, makes me feel resentful towards Launcelot. Overall, I thought Shylock was a reasonably good employer. Shylock is also a father to Jessica in the play and at one point the audience learns what he felt about his late wife. ...read more.

Towards the end of the play Shylock's mood dramatically changes, until he feels sick and must leave: "I pray you give me leave to go from hence, I am not well..." This is caused by him having to change his religion to Christianity, because of Antonio. Shylock's coldly calculated attempt to kill Antonio, prevented me from viewing him in a positive light, but towards the end of the courtroom scene he became more human, which is when I began to commiserate with him. My overall opinion of Shylock is very varied, and I felt that he had been the most victimized character in the play. I thought all the Christians in the play had played a significant part in the downfall of Shylock. I felt that he often appeared to paint himself as a cruel and evil character. Occasionally he had his human moments, which was the overall highlight of his character. I felt it was extremely arduous not to feel pity for him. He was such a poignant character. I think in Shakespeare's time there would be entirely different view towards Shylock, as the result of the majority of the public having some kind of prejudice against Jews. The audience's reaction towards Shylock and the way he was treated would be more subdued and they would find it much more acceptable. ...read more.