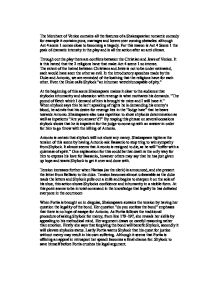 The Merchant of Venice contains all the features of a Shakespearian romantic comedy for example it contains puns, marrages and lovers over coming obstacles. although Act 4 scene 1 comes close to becoming a tragedy. For this reason is Act 4 Scene 1 the peak of dramatic intensity in the play and is all the action after an anti climax. Through out the play there are conflicts between the Christian and Jews of Venice. It is this hatred that the 2 religions have that make Act 4 scene 1 so intense. The extent of the hatred between Christians and Jews is not to be under estimated, each would have seen the other as evil. In the introductory speeches made by the Duke and Antonio, we are reminded of the loathing that the religions have for each other. Even the Duke calls Shylock "an inhuman wretch/uncapable of pity." ...read more.

One explanation for this could be that death is the only way for him to express his love for Bassanio, however others may say that he has just given up hope and wants Shylock to get it over and done with. Tension increases further when Narissa (as the clerk) is announced, and she present the letter from Bellario to the duke. Tension becomes almost unbearable as the duke reads the letters and Shylock pulls out a knife and begins to sharpen it on the sole of his shoe, this action shows Shylocks confidence and inhumanity in a visible form. At this point seems to be in total command in the knowledge that legally he has defeated everyone in the courtroom When Portia is brought on in disguise, Shakespeare sustains the tension by having her question the legality of the bond. Her question "do you confess the bond" emphases that there is no hope of escape for Antonio. ...read more.

. . I'll not deny him anything I have, / No, not my body nor my husband's bed. . . . I'll have that doctor for my bedfellow." To which Nerissa adds, "And I his clerk." And further, when they return the rings, Portia is able to affirm, "For by this ring the doctor lay with me," to which infidelity Nerissa is again able to add, the "doctor's clerk." By this time Bassanio and Gratiano have been teased enough, and the end of the scene is a sequence of suprises: first, the true identity of the lawyer and his clerk, then of Antonio's good fortune, and finally, of Lorenzo and Jessica's inheritance. I believe that Act 4 scene 1 is where the play reaches it's dramatic high point as it is the most intense with the matter of the bond reaching it's crisis and it's resolution and I believe that the action after this is an anti climax because the mood is lightened with puns, the harmless exchange of the rings, and a happy ending, Antonio's lost ships back in the port. ...read more.