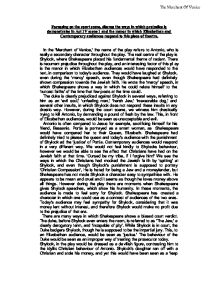 THE MERCHANT OF VENICE

Focussing on the court scene, discuss the ways in which prejudice is demonstrates in Act 1V scene 1 and the manor in which Elizabethan and Contemporary audiences respond to this piece of theatre. In the 'Merchant of Venice,' the name of the play refers to Antonio, who is really a secondary character throughout the play. The real centre of the play is Shylock, where Shakespeare placed his fundamental theme of racism. There is recurrent prejudice throughout the play, and an interesting factor of this play is the manor in which Elizabethan audiences would have responded to the text, in comparison to today's audience. They would have laughed at Shylock, even during the 'mercy' speech, even though Shakespeare had definitely shown compassion towards the Jewish faith. He wrote the 'mercy' speech, in which Shakespeare shows a way in which he could relate himself to the 'outcast faiths' of the time that few poets at the time could. The duke is clearly prejudiced against Shylock in several ways, referring to him as an 'evil soul,' 'unfeeling man,' 'harsh Jew,' 'inexecrable dog,' and several other insults, in which Shylock does not respond these insults in any drastic way. ...read more.

He appears to be mean and cruel and it seems as though he loves money above all things. However during the play there are moments when Shakespeare gives Shylock speeches, which show his humanity. In these moments, the audience is made to feel sorry for Shylock. Shakespeare has created a character in which one could use as a contrast of audiences of the two eras. Today's audience may feel sympathy for Shylock, considering that it was money lent without interest, and therefore Shylock would make no profit due to the prejudice of that era. There are many ways in which Shakespeare shows a biased court verdict. The duke, before Shylock even enters the room, is referred to as 'The Jew,' a clearly derogatory term, and 'incapable of pity'. While Shylock is in court, the Duke badgers Shylock, though he is supposed to be the impartial jury. This, to an Elizabethan audience, would be seen as 'justice.' The behaviour of the Duke would be seen as an improper way of treating the prosecutor today. ...read more.

Antonio hates him because he is Jewish, however when considering Shylock's place in society, there is more to his hatred than just religion. Antonio also thinks Shylock is despicable because of his un-holy and sinful profession, even though Antonio and the other Venetians take advantage of his business. Shylock's job poses a threat to Christian values, but it is also slightly more significant that just that. The Christian Venetians feel threatened because they themselves are not being very Christian and ruining their society themselves; they are taking advantage of a moneylender, and try to deny Shylock of the Christian virtue of mercy, as Shakespeare tried to depict Antonio. Shakespeare shows a clear ubderstanding of racism that would have been ignored by the Elizabethan audience. For exanple, the humanities speech said by Shylock earlier in the play is very moving to a modern audience, but a joke to Elizabethan audiences. Shakespeare was able to innitiate with an audience weell before his time and shows ways in which he had manipulated the play to suit the audience. It is a great comparison, and shows the culture of the audience of either time. ...read more.