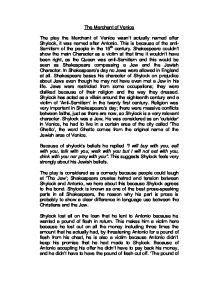 The merchant of venice

The Merchant of Venice The play the Merchant of Venice wasn't actually named after Shylock, it was named after Antonio. This is because of the anti-Semitism of the people in the 16th century. Shakespeare couldn't show the main Character as a victim at that time it wouldn't have been right, as the Queen was anti-Semitism and this would be seen as Shakespeare compassing a Jew and the Jewish Character. In Shakespeare's day no Jews were allowed in England at all. Shakespeare bases his character of Shylock on prejudice about Jews even though he may not have even met a Jew in his life. Jews were restricted from some occupations; they were disliked because of their religion and the way they dressed. Shylock has acted as a villain around the eighteenth century and a victim of 'Anti-Semitism' in the twenty first century. Religion was very important in Shakespeare's day; there were massive conflicts between faiths, just as there are now, so Shylock is a very relevant character. Shylock was a Jew, He was considered as an 'outsider' in Venice, he had to live in a certain area of the city called 'The Ghetto', the word Ghetto comes from the original name of the Jewish area of Venice. ...read more.

Jessica says how she doesn't like being her father's daughter even though she knows it is a "heinous sin" for a daughter to have such feelings. From then on Shylock finds out that his daughter is missing and he tells the audience how "his daughter is his own flesh and blood". Shakespeare tries to make the audience feel sorry for Shylock and look upon him as a victim because he has lost his daughter Launcelot Gobbo who Shylock employed would rather work for Bassanio than work for a Jew, this doesn't do anything for Shylocks reputation if his servant doesn't like working for him. This is also harsh on Shylock because the only reason that Launcelot Gobbo doesn't want to work for him is because he is a Jew, this shouldn't matter. "If you prick us do we not bleed? If you tickle us do we not laugh? If you poison us do we not die? And if you wrong us shall we not revenge? If we are like you in the rest we will resemble you in that. If a Jew wrong a Christian what is his humility? Revenge! If a Christian wrong a Jew what shall his sufferance be by Christian example? ...read more.

"Ill have my bond: speak not against my bond. I have sworn on oath that I will have my bond. Thou call'st me dog beware my fangs". Shakespeare shows Shylock as a very demanding man and he won't give up until he gets what he wants. He repeats the word "bond" lots of times; he sounds determined to get his bond. Shylock doesn't often let anyone else have their say, only he is allowed. When Shylock is talking we see him as a real person by some of the things he says especially how he acts in court about the bond. I have shown you both sides of Shylock as a victim and a villain. I think that Shakespeare's intentions were to make the audience dislike Shylock and think him to be a villain. Shakespeare does this when Shylock makes the bond with Antonio even though he isn't getting any money for this; he still wants to kill Antonio. In conclusion I see Shylock as a victim, because he has been through a lot with people hating him for his religion and his daughter leaving him to get married to a Christian. Shylock is the same as any other person even though he wanted a pound of Antonio's flesh, anyway Antonio agreed to it in the first place and if he was unsure he shouldn't have made a bond. ...read more.