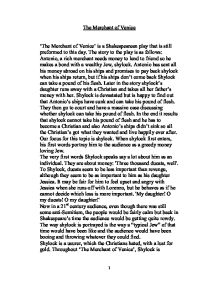 The Merchant of Venice 'The Merchant of Venice' is a Shakespearean play that is still preformed to this day. The story to the play is as follows: Antonio, a rich merchant needs money to lend to friend so he makes a bond with a wealthy Jew, shylock. Antonio has sent all his money abroad on his ships and promises to pay back shylock when his ships return, but if his ships don't come back Shylock can take a pound of his flesh. Later in the story shylock's daughter runs away with a Christian and takes all her father's money with her. Shylock is devastated but is happy to find out that Antonio's ships have sunk and can take his pound of flesh. They then go to court and have a massive case discussing whether shylock can take his pound of flesh. In the end it results that shylock cannot take his pound of flesh and he has to become a Christian and also Antonio's ships didn't sink so all the Christian's got what they wanted and live happily ever after. Our focus for this topic is shylock. When shylock first enters, his first words portray him to the audience as a greedy money loving Jew. ...read more.

In the course of the rest of the play, Shylock is most often referred to simply as 'the Jew'. But shylock also held a grudge against the Christians. He says so plainly 'I hate him for he's a Christian.' Now this would make the audience think "He's not only a Jew, but a racist Jew!" that one line fuels all their hatred for Jews but in act 1 scene 3 pg33 shylock explains why he is so angry towards the Christians. It's because they have been racist to him all his life. They've spat on him, called him names, spat on him some more this time on his beard and basically took the mick out of him all the time. "They have spat upon my Jewish gabardine", he says. Some people in a 21st century audience would feel sorry for shylock but back in 1596 some people showed no remorse. It is now revealed that Antonio who would have been viewed as the hero at least by an Shakespearian audience has a nasty side to him after all. Long before Shylock plotted against him, Antonio seemed to take a pride in spurning Shylock, treating him in public with rudeness and contempt. This type of behaviour appears to contradict with the rest of his character. ...read more.

Would she were hearsed at my foot and the ducats in her coffin!' This wish for his daughter's death surely revokes much of the sympathy that was created by the former plea for the recognition of Shylock's humanity. In the moment of this outburst, Shakespeare again portrays an image of a cruel, murderous Jew who, in this instance, is willing to kill his own daughter for the sake of a few ducats. But in the play 'The Merchant Of Venice', Shakespeare has emphasised Shylock's character as a man, rather than his identity as a Jew and a villain. Part of the play reveals how some Christians are bad men, as are some Jews. However, the genius of 'The Merchant of Venice' is that it portrays many differing attitudes, which allow us to make up our own minds as to the character of individuals rather than on race or religion. So I think that a Shakespearean audience and a 21st century audience would react to shylock in their own way. It depends on how the individual sees the play because I doubt that the whole audience in a theatre in 1596 could all hate shylock just because he was a Jew, same as in a 21st century audience. Like I said you have to judge him as an individual rather than on his race or religion. Zeshan Hayat 1 ...read more.