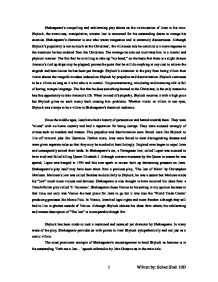 Shakespeare's compelling and exhilarating play shows us the victimisation of Jews in his time. Shylock, the avaricious, manipulative, sinister Jew is renowned for his outstanding desire to avenge his enemies. Shakespeare's character is one who wants vengeance and is extremely discourteous. Although Shylock's popularity is not as much as the Christians', the villainous acts he commits is a mere response to the treatment he has endured from the Christians. The revenge he acts out motivates him in a mental and physical manner. The fact that he is willing to take up "my bond," on the basis that there is a slight chance Antonio's tied up ships may be plagued, proves the point that he will do anything at any cost to relieve the anguish and humiliation he has been put through. Shylock's alteration in the play from being villain then victim shows the vengeful mindset induced on Shylock by prejudice and discrimination. Shylock continues to be a villain as long as it is he who is in control. His procrastinating, calculating and menacing talk is full of boring, meagre language. The fact that he does something banned to the Christians, is the only reason he has this opportunity to take Antonio's life. When in need of sympathy, Shylock receives it with a high price but Shylock gives no such mercy back causing him problems. Whether victim or villain in our eyes, Shylock was always to be a villain to Shakespeare's theatrical audience. Since the middle ages, Jews have had a history of persecution and hatred towards them. They were "aliens" with no home country and had a reputation for being corrupt. They were accused wrongly of crimes such as murders and treason. This prejudice and discrimination soon forced Jews like Shylock to live off immoral jobs like Usurance. Further more, Jews were forced to wear distinguishing dresses and were given separate rules so that they may be mocked at humiliatingly. ...read more.

He infuriates Shylock throughout the scene and laughs while saying "you sharpen your knife not on thy sole, but on thy soul." Shylock is then described as an "inexorable dog" and is told that he has reincarnated from a wolf. Gratiano further insults Shylock calling him a "currish spirit" and wolf again: "Governed a wolf, who, hanged for human slaughter." Gratiano's following summary of Shylock is "thy desires/are wolvish, bloody, starved and ravenous." The discriminatory nature of the Christians really comes through here as Antonio calls Shylock a "cruel devil." Gratiano continues his insolent behaviour plagiarising Shylock's speeches as the tide turns: "O upright judge! /mark, Jew - O learned judge!" This is unlike the Christians' general attitude: threatening others and heckling. Portia acts just as Shylock had, contradicting her previous speech about mercy: "The Jew shall have all justice; soft, no haste! /he shall have nothing but the penalty." Gratiano's torment now gets irritating and the audience really would sympathise with Shylock: "A second Daniel, a Daniel, Jew! /now, infidel, I have you on the hip." Shylock's words haunt him here from earlier and he has now reached a tragic state. As Shylock goes "down, therefore, and beg for mercy," he is derided and reproached by Gratiano in Henry Goodman's film. As Shylock leaves a broken man, Gratiano makes one colossal attempt to break Shylock "Had I been judge, thou shouldst have had ten more, to bring thee to the gallows, not to the font." This inhumane, barbarous comment torments and causes suffering upon Shylock. This victimisation is appalling and can be considered horrendous behaviour. Al Pacino's film shows the insincere side of Christians. They are shown as "flesh and blood" playing with money and sexual parts. Shylock's rare and short moments where we sympathise with him, are overcome by the: raw meanness, immoral actions and vengeful behaviour he possesses. From the first sentence, Shylock speaks in a cold, calculating and deferring manner. ...read more.

The fact that he loses his daughter and money at a time he feels uncomfortable: but he also is reminded of his beloved wife, Leah, and the one and only precious remembrance he had of her. His cruel ways also have him resigned from his dignity and religion which he abused. We feel anger and appalled towards the Christians and sympathy is offered to the tormented, mocked Jew; however this is not long lived as Shylock's fury and misery takes over. It has always been said that Shakespeare has made Shylock 'one of the most complicated characters in English literature' and he is definitely not a 'one dimensional character.' Shylock treats his treasured with vindictiveness and with no conscience. He is deprived of a life and we feel helpless but to go up and hug him as he cries at the end of the backfired trial. In my opinion Shakespeare set out to implore to us that Shylock may be a Jew, but that not all Jews are iniquitous because they want to be; they are because they are forced to be. Shakespeare also wanted Shylock to act as a barrier for love and friendship. Although Shylock may not be a 'legend nor a legacy' to a Shakespearian audience, John Gross's idea of the 'Hath not a Jew' speech being the main point is a fine one; though he portrays his idea in such a way, we are made to sympathise with Shylock. Shylock once again uses mediocre language, repeating the phrase "are you answered?" Shylock is fully entitled to take a pound of flesh from Antonio as the law legally allows it but he fails to realise that the law is biased and is intended to be just. Shylock is very careful about his rights and he complains rightfully about the way Christians interpret the law. He asks them whether it is 'right' to keep slaves while saying no to moneylenders. In the end, Shylock, the broken man, can do no more but leave a victimised character remembered throughout history. 1 Written by: Sohan Shah 10D ...read more.