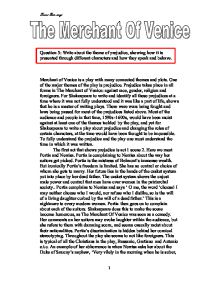 Question 5: Write about the theme of prejudice, showing how it is presented through different characters and how they speak and behave. Merchant of Venice is a play with many connected themes and plots. One of the major themes of the play is prejudice. Prejudice takes place in all forms in The Merchant of Venice: against race, gender, religion and foreigners. For Shakespeare to write and identify all these prejudices at a time where it was not fully understood and it was like a part of life, shows that he is a master of writing plays. There were wars being fought and laws being passed for most of the prejudices listed above. Most of the audience and people in that time, 1590s-1600s, would have been racist against at least one of the themes tackled by the play, and yet for Shakespeare to write a play about prejudice and changing the roles of certain characters, at the time would have been thought to be impossible. To fully understand the prejudice and the play one must understand the time in which it was written. The first act that shows prejudice is act 1 scene 2. Here we meet Portia and Nerrisa. Portia is complaining to Nerrisa about the way her suitors get picked. Portia is the mistress of Belmont's immense wealth. But ironically Portia's freedom is limited. She has no control or choice of whom she gets to marry. Her future lies in the hands of the casket system put into place by her dead father. The casket system shows the unjust male power and control that men have over women in the patriarchal society.. Portia complains to Nerrisa and says ' O me, the word 'choose! I may neither choose who I would, nor refuse who I dislike, so is the will of a living daughter curbed by the will of a dead father.' ...read more.

The final lines of act 2 scene 7, show Portia's severe hatred of outsiders. In the penultimate line she says, 'A gentle riddance draw the curtains go'. She is barely able to contain her contempt. The fact that she says ' a gentle riddance', shows that she is glad that he is leaving. In her final line her racism comes to light in all its strength. 'Let all of his complexion choose me so'. If we compare the Prince of Morocco's departure with the departure of The Prince of Arragon, we see that Portia does not treat the Princes the same. She is racist against Morocco and really hates him. But she only ridicules Arragon, and has a joke with Nerrisa about him, calling him an insect. 'Thus hath the candle singed the moth'. The previous scene closed with one loser, Morocco. Now Scene 8 opens with the report of another loser Shylock. Solanio and Salarino, tell the audience of how Shylock responded to the loss of all his possessions. Once again, Shylock is not named. He is described as 'the villain Jew' and 'the dog Jew'. Solanio and Salarino are depicting his losses unsympathetically. Solanio starts imitating Shylock and mocks the way that he complains about his stolen riches just as much as his eloped daughter. This hints to the audience that Shylock is more concerned for his riches and angry at his daughter for stealing them. 'My daughter! O my ducats! O my daughter!/Fled with a Christian! O my Christian ducats!' Some of his anger may have been due to him knowing that his riches are in the possession of a Christian. Once Jessica marries Lorenzo, her money will become Lorenzo's property. Again this shows the iniquitous male dominance in a patriarchal society. Salarino adds on extra details about Shylocks misery. He tells Solanio that even the young children delight in his losses. ...read more.

'This bond doth give thee here no jot of blood'. Gratiano seizes the opportunity to mockingly imitate all of Shylock's previous praise of Portia. His racism is very evident: 'O Jew, an upright judge, a learned judge!' Shylock has all his wealth confiscated, half going to Antonio and half going to the state. The Duke pardons him and Antonio allows him to retain a half but the half must eventually go to Lorenzo and Jessica. But Antonio has one more condition. Shylock must turn Christian. This would have been deeply offensive to Shylock but he is forced to agree. Shylock is left to leave he stage humiliated. Shylock has become a victim of an extreme form of racism. He has lost all of his wealth and is forced to turn Christian. The whole courtroom was against him because of his race. Gratiano's mockery shows all too clearly the anti-Semitism that plagued the trial and the whole play. Through out the play we encounter different prejudices. Merchant of Venice is known to be a comedy. But beneath the comedy lies the murky world of racism, sexism e.t.c. Shakespeare has done extremely well with the Merchant Of Venice. We know that Shakespeare was influenced by the society of his time. Therefore, the issues tackled by Shakespeare give us an insight into what it was like to be a woman or a Jew or a foreigner in the Elizabethan era. Some people have complained bout teaching the book for GCSE, but if we do not learn about racism and see the effects it has on the particular race then how are we meant to know how racism affects people. Shakespeare changed the mood of the audience throughout the play. For example with Shylock, we first liked him, then hated him, then liked him and then hated him. I believe that Shakespeare wrote this play to make people stop being racist towards jews at the time. Tamer Ben-nagi 1 ...read more.