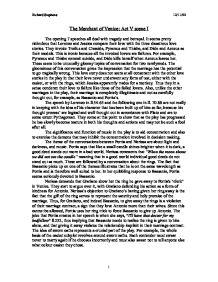 The Merchant of Venice: Act V scene I

The Merchant of Venice: Act V scene I The opening 7 speeches all deal with tragedy and betrayal. It seems pretty ridiculous that Lorenzo and Jessica compare their love with the three disastrous love stories. They invoke Troilus and Cressida, Pyramus and Thisbe, and Dido and Aeneus as their models. This is ironic because all the invoked lovers are failures. For example, Pyramus and Thisbe commit suicide, and Dido kills herself when Aeneus leaves her. These seem to be unusually gloomy topics of conversation for two newlyweds. The gloominess of this conversation gives the impression that the marriage has the potential to go tragically wrong. This love story does not seem at all consonant with the other love stories in the play in that their love never underwent any form of test, either with the casket, or with the rings, which Jessica apparently trades for a monkey. Thus they in a sense condemn their love to failure like those of the failed lovers. ...read more.

They start to argue over it, with Gratiano defending his action as a form of kindness for Antonio. Nerissa's objection to Gratiano's having given her ring away is the fact that the gift of the ring serves to represent the sanctity and holy promise of the marriage. Thus, for Gratiano, and indeed Bassanio, to give away the rings is a violation of their marriage contract, a sign that they love Antonio more than their wives. Since this cannot be allowed, Portia uses her ring trick to force Bassanio to give up Antonio. The joke that Portia creates in her speech is when she says, "I'll have that doctor for my bedfellow" ll.232, thus implying that Bassanio needs to realise the ring is given to him alone, and that giving it away violates the relationship implicit in their marriage contract. The idea of sworn oaths represents a crucial part of the play. For example, the whole basis of the casket subplot revolves around sworn oaths. ...read more.

I find the news Portia gives Antonio convincing. I believe it is not intended to give the play a happy ending, but rather to add to Antonio's defeat, by handing him his money and ships at the end, then essentially telling him to return to Venice and forget about Bassanio. This is in a sense a rather comical occurrence, and so to that extent is in harmony with the comic ending provided by the play ending with the three pairs of lovers. Lorenzo and Jessica do not really deserve the gift that Nerissa reveals to them considering how disrespectful they have been towards Shylock. However, from the point of view that they have been more loyal to one another than the other lovers they are deserving of the gifts. The play is given a rather silly, happy ending with Gratiano having the final words. This is in keeping with Shakespeare's intention for it to be a comedy. Richard Stephens 12/11/02 1 ...read more.