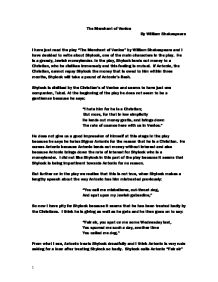 The Merchant of Venice By William Shakespeare

The Merchant of Venice By William Shakespeare I have just read the play "The Merchant of Venice" by William Shakespeare and I have decided to write about Shylock, one of the main characters in the play. He is a greedy, Jewish moneylender. In the play, Shylock lends out money to a Christian, who he dislikes immensely and this feeling is mutual. If Antonio, the Christian, cannot repay Shylock the money that is owed to him within three months, Shylock will take a pound of Antonio's flesh. Shylock is disliked by the Christian's of Venice and seems to have just one companion, Tubal. At the beginning of the play he does not seem to be a gentleman because he says: "I hate him for he is a Christian; But more, for that in low simplicity He lends out money gratis, and brings down The rate of usance here with us in Venice." He does not give us a good impression of himself at this stage in the play because he says he hates Signor Antonio for the reason that he is a Christian. He curses Antonio because Antonio lends out money without interest and also because Antonio brings down the rate of interest for Shylock who is a moneylender. I did not like Shylock in this part of the play because it seems that Shylock is being impertinent towards Antonio for no reason. ...read more.

While Shylock is away, Jessica elopes with her love, Lorenzo, who is a Christian. When Shylock finds out that his daughter has run away with a Christian he is mocked by the Christians who indicate that Shylock was devastated that his daughter left but he was devastated that his ducats had left with her too: "My daughter! O my ducats! O my daughter! Fled with a Christian my Christian ducats!" He then shows that he is angrier about losing the ducats than losing his daughter, which makes me dislike him. He seems quite selfish at this part of the play: "Of double ducats, stolen from me by my daughter! And jewels - two stones, two rich and precious stones, Stolen by my daughter! Justice! Find the girl!" But subsequently in the play he stresses the common humanity of both Jews and Christians. He shows that there is no disparity between the two religions. I feel slightly sorry for Shylock because it is now that the realisation that Shylock is the same as the rest comes across. He stands up for himself and I feel happy that he had the fortitude to do this: "I am a Jew. Hath a Jew not eyes? Hath not A Jew hands, organs, dimensions, Senses, affections, passions?" Shylock then concludes his speech with the hint that he seeks revenge: "And if you wrong us, shall we not revenge? ...read more.

When Antonio tries to speak, Shylock interrupts him by saying that he will have his bond and tells Antonio not to speak against his bond. Even when Antonio begs Shylock to let him speak, he is still adamant not to let him. I think he does this because he is proud. He does not want to be seen as a weak, dull-eyed fool because it would be bad for his reputation. In the famous trial, the Duke asks Shylock to show pity towards Antonio and asks him to drop the current forfeit and let Antonio pay back the loan with ducats. Shylock refuses and he will not tell why he hates Antonio so much to do this. But then I recall how badly Antonio and the other Christians treated Shylock, and as a result of that, my feelings of hatred for Shylock are weakened by feelings of pity. When Bassanio offers to give Shylock six thousand ducats instead of the original ducats, Shylock continues to refuse. At this point, I realise how much Shylock wants Antonio dead. When Portia, who is dressed up as the Duke and who is also Antonio's wife, says that Antonio has to stick to the forfeit, Shylock seems to be very jubilant. When the tables are turned and he is at the risk of losing a pound of his own flesh, he is a lot more merciful. He seems very two faced and I finally come to the conclusion that he is a self-pitiful, money grabbing Jew that is just out to help himself. 1 ...read more.