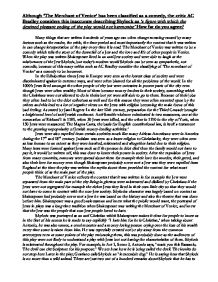 The Merchant of Venice Coursework

Although 'The Merchant of Venice' has been classified as a comedy, the critic AC Bradley considers this inaccurate describing Shylock as 'a figure with which the destined pleasant ending of the play would not harmonise' How far do you agree? Many things that are written hundreds of years ago can often change meaning caused by many factors such as the reader, the critic, the time-period and most importantly the context that it was written in can change interpretation of the play every time it is read. The Merchant of Venice was written to be a comedy which tells the story of the downfall of a Jew and the love and life of other people in Venice. When the play was written Shakespeare lived in an anti-Jew society and were able to laugh at the misfortunes of the Jew Shylock, but today's modern world Shylock can be seen as sympathetic, not comedic, because of this many critics such as AC Bradley consider the classifying of 'The merchant of Venice' as a comedy to be incorrect. In the Elizabethan times Jews in Europe were seen as the lowest class of society and were discriminated against in extreme ways, and were often blamed for all the problems of the world. In the 1000's Jews lived amongst the other people of city but were outcastes in poorer parts of the city even though Jews were often wealthy. Most of them became money lenders in their society, something which the Christians were not allowed to do in theirs but yet were still able to go to them. ...read more.

The insults do not stop here Later in the play; Gratiano calls Shylock an "inexecrable dog." He is saying hear that Shylock is no more than a wild animal. These are just two out of a hundred remarks about Shylock that he has to face because of his religion. These insults show the influences of context of the play because in real life Jews were subjected to a lot of the abuse similar to what Shylock received. The downfall of Shylock is sometimes seen as a subplot to the main story of love and friendships of two Christians of the play. The issue between Shylock and Antonio only arises because Bassanio asks Antonio for money to go and court Portia but as Antonio has none available at the moment he takes a loan from Shylock with a bond saying that if he does not pay, a pound of flesh will be taken from him. After Bassanio wins the had of marriage a lot of confusion and follow as Bassanio tries to get Antonio out of the bond as his intended ships with lots of valuables have sunk so is unable to pay the loan back and the comedic elements of the play come near an end after Portia dresses up as a man to fight the case for Antonio and eventually wins. Still dressed as a man she asks for a gift from Bassanio. Portia tells Bassanio, "That 'scuse serves many men to save their gifts, An if your wife be not a madwoman, And know how well I have deserved the ring, She would not hold out enemy forever, For giving it to me. ...read more.

people from different backgrounds, One of these critics, Alvin Klein says that "The play is not a comedic read, and it is rarely played for laughs," Klein once again notes the audience that is interpreting the play. He says that today's society isn't one to just laugh at the misfortunes of shylock, audiences know think about the play. This had led to many critics calling it a 'tragedy' or a 'tragic comedy'. I would say that these critics are correct in saying that it is no longer a comedy. The story of shylock seems to take a major role of the play, it is referred to and seen more than the romance parts of the play with the main part being the bond between Shylock and Antonio. The comedic elements do arise in the play enough to be called a dark comedy but the tragic elements in the play are throughout with someone always mentioning the bond with the merchant and the Jew and to say that the few comedic moments can classify it as a comedy would be ridiculous. When it was written the audience was amused by the falling of the Jew, they hated them and would love to see them failing in real life. In today's world the play is a tragedy full of mistreatment, allowing it to be labelled as a tragedy as it no longer provides laughs to the audience or the reader. This play has become an example to show that as the context in which a work of literature is read changes, so can its interpretations. ...read more.