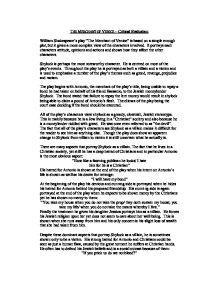 The Merchant of Venice- Critical Evaluation

THE MERCHANT OF VENICE - Critical Evaluation William Shakespeare's play "The Merchant of Venice" is based on a simple enough plot, but it gives a more complex view of the characters involved. It portrays each characters attitude, opinions and actions and shows how they affect the other characters. Shylock is perhaps the most noteworthy character. He is centred on most of the play's events. Throughout the play he is portrayed as both a villain and a victim and is used to emphasise a number of the play's themes such as greed, revenge, prejudice and racism. The play begins with Antonio, the merchant of the play's title, being unable to repay a bond he had taken on behalf of his friend Bassanio, to the Jewish moneylender Shylock. ...read more.

There are many aspects that portray Shylock as a villain. The fact that he lives in a Christian society, yet still he has a deep hatred of Christians and in particular Antonio is the most obvious aspect: "How like a fawning publican he looks/ I hate him for he is a Christian" His hatred for Antonio is shown at the end of the play when his intent on Antonio's life is shown as well as his desire for revenge: "I will have my bond" At the beginning of the play his devious and cunning side is portrayed when he hides his hatred for Antonio behind his proposed friendship. His cunning side is again portrayed at the end of the play when he expects to be shown mercy by the Christians yet he has shown no mercy to ...read more.

He often has to defend his Jewish beliefs and is a social outcast because of them: "If you prick us do we not bleed?" Solanio and Solerio mock him at every opportunity, due to their racist views, particularly when his daughter runs away taking some of his wealth. At the end of the play when Shylock is forced to lose all that he has worked for, including his religion, he is most definitely seen as a victim of Christian prejudice. These events also show that Shylock is not the only character plagued with greed and revenge. Ultimately, I think Shylock was intended to be a villain simply because there was no other character who could have taken the needed role. However, I also think that Shylock's oppressed status as a Jew shows the racism and prejudice that occurred in a Christian society as well as challenging the pre-conceptions and ideologies of Christian rule at that time. ...read more.