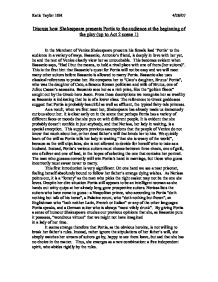 Discuss how Shakespeare presents Portia to the audience at the beginning of the play (up to Act 2 scene 1) In the Merchant of Venice Shakespeare presents his female lead 'Portia' to the audience in a variety of ways. Bassanio, Antonio's friend, is deeply in love with her yet, he and the rest of Venice clearly view her as untouchable. This becomes evident when Bassanio says, "Had I but the means, to hold a rival place with one of them (her suitors)". This is the first hint that Bassanio's quest for Portia will not be easy and we will meet many other suitors before Bassanio is allowed to marry Portia. Bassanio also uses classical references to praise her. He compares her to "Cato's daughter, Brutus' Portia", who was the daughter of Cato, a famous Roman politician and wife of Brutus, one of Julius Caesar's assassins. ...read more.

We quickly learn of the will as Portia tells her lady in waiting "that she is weary of the world", because as the will stipulates, she is not allowed to decide for herself who to take as a husband. Instead, Portia's various suitors must choose between three chests, one of gold, one of silver and one of lead, in the hopes of selecting the one that contains her portrait. The man who guesses correctly will win Portia's hand in marriage, but those who guess incorrectly must swear never to marry. This first introduction is very significant. On one hand we see a near prisoner, feeling herself absolutely bound to follow her father's strange dying wishes. As Nerissa points out, it is a "lottery" as the man who picks the right casket may not be the one she loves. ...read more.

Instead, rather ignore the stipulations of her father's will, she simply watches her stream of suitors go by, happy to see them leave, but sad that she has no choice in the matter. Thus, she emerges as a rare combination: a free independent spirit, who abides rigidly by the rules. Overall by the end of Act 2 we, the audience know more about Portia and her character. However there are two different sides to her character. One, the wealthy heiress caught up in a fairy-tale , enclosed somewhat like the caskets her future is bound by, an untouchable goddess. Or two, the witty independent strong-willed character whose strict adherence to laws and other strictures is similair to the city of Venice, the centre point of the play. Perhaps Portia is both of these characters but at this point it is too soon to judge. However it is clear already that Portia won't be a "typical" heroine. Katie Taylor 10H 4/28/07 ...read more.