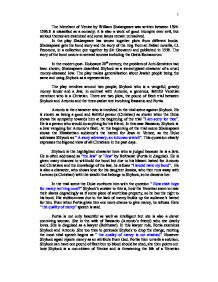 The Merchant of Venice - how does the use of language style and structure contribute to the play's success?

The Merchant of Venice by William Shakespeare was written between 1594-1596.It is classified as a comedy; it is also a work of good triumphs over evil, but serious themes are examined and some issues remain unresolved. In the play Shakespeare has woven together plots from different books. Shakespeare gets the bond story and the story of the ring from an Italian novella, LL Pecorone, in a collection put together by Sir Geovanni and published in 1558. The story of the bond occurs in several sources including the Gesta Romanorum. In the modern post- Holocaust 20th century, the problem of Anti-Semitism had been shown; Shakespeare described Shylock as a stereotypical character of a cruel, money-obsessed Jew. The play makes generalisation about Jewish people being the same and using Shylock as a representative. The play revolves around two people; Shylock who is a vengeful, greedy money lender and a Jew, in contrast with Antonio, a generous, faithful Venetian merchant who is a Christian. There are two plots, the pound of flesh trial between Shylock and Antonio and the three-casket test involving Bassanio and Portia. Antonio is the character who is involved in the trial scene against Shylock. He is shown as being a good and faithful person (Christian) as shown when the Duke shows his sympathy towards him at the beginning of the trial "I am sorry for thee". He is a person who would do anything for his friend. In this case Bassanio. Shylock is a Jew vengeing for Antonio's flesh. At the beginning of the trial scene Shakespeare shows the Elizabethan audience's the hatred for Jews in Venice, as the Duke addresses Shlyock as " A stony adversary, an inhuman wretch". ...read more.

Bassanio enters and says what a cruel and heartless man Shylock is (showing his love for his friend Antonio). This part tells the audience how strong this friendship is between both friends. He offers Shylock blood money, thrice the original sum but Shylock repetitively refuses "if every ducat in six thousand ducats. Were in six parts ...I would have my bond!" Shylock refuses bluntly without any hesitation. The audience will be ever more strongly prejudiced against all Jews because of Shylock's greed for money. The Duke asks for advice from Ballario, the learned doctor. He receives a letter from Ballario. Antonio is prepared to die for Bassanio and Shylock is sharpening his knife ready for his revenge until Gratiano calls him "O be thou damned inexcreable dog." Shylock refuses to show mercy many times and is ready to abide to the law "I stand here for the law." The Duke receives a letter from Ballario saying "a young and learned doctor." Portia arrives (the young learned doctor) fooling the audience and people in court. Portia intervenes and immediately asks who's who, she asks Shylock " then the Jew be merciful" not knowing Shylock's many refusals to the Duke's pleas. Her speech begins "the quality of mercy is not strained" one of the most powerful and famous speeches of Shakespeare. Shakespeare includes a lot of images to stimulate the audience's imagination. He compares mercy to the gentle drops of rain that descend from Heaven "It droppeth as the gentle ran upon the place beneath." Though this seems to make no impression on Shylock. The sentence "It blesses him that gives and him that takes" much like the quality of friendship between Bossanio and Antonio. ...read more.

However the contemporary audience do not face his problem, usually male and female take the role to heighten romantic exchanges especially between Portia and Bassanio. Shakespeare successfully combines the themes of comedy, irony, sadness, horror and justice in "The Merchant of Venice" to produce a play full of dry humour and thought provoking storylines. Many aspects of the plot such as the discrimination of Jews are regretfully still in place in today's society. Throughout the play there are also the reoccurring image of the scapegoat. Both men Shylock and Antonio fit this description, with Shylock is clearly the social outcast, who is driven out of society and Antonio represents the goat about to be sacrificed. Many people regard this scene to be defining Shylock's thirst to take revenge. Well I agree to this as it clearly expresses Shylock's view of Antonio. I do not blame Shylock for this attitude as Antonio has done unforgivable things to him in the past. The court room scene has expressed all characters' thoughts and emotions towards each other. The tension between the Jews and Christians are powerfully explored, though my view is that Shylock should be the winner but he is defeated. The trial scene is brilliantly shown in the courtroom as if a real life event. The actors who take part in this scene show their significance in helping to create a dramatic effect. For Shylock justice had been hanging throughout this scene, creating suspense. Antonio has won the case and a sentence has been given; though I think it is unreasonable. Shakespeare has successfully used devices to create a great impact on the audience. The effective use of language style and structure contributed effectively to the play's success. 5 1 ...read more.