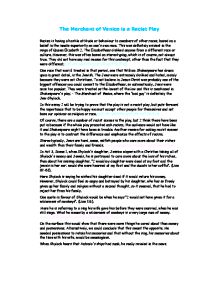 The Merchant of Venice is a Racist Play.

The Merchant of Venice is a Racist Play Racism is having a hostile attitude or behaviour to members of other races, based on a belief in the innate superiority on one's own race. This was definitely evident in the reign of Queen Elizabeth I. The Elizabethans disliked anyone from a different race or culture. However, this was often based on stereotyping, which is of course, not always true. They did not have any real reason for this contempt, other than the fact that they were different.codf dfr sedfdfw ordf dfk indf fodf df! One race that was ill treated in that period, one that William Shakespeare has drawn upon in great detail, is the Jewish. The Jews were extremely disliked and hated, mainly because they were not Christians. To not believe in Jesus Christ was probably one of the biggest offences you could commit to the Elizabethans, so automatically, Jews were none too popular. They were treated as the lowest of the low and this is mentioned in Shakespeare's play; - The Merchant of Venice, where the 'bad guy' is definitely the Jew-Shylock. ...read more.

She obviously wants to change her religion, which would have warmed them to her. I think for all of this they would have hated him. And for this reason I believe this particular scene to be racist. In Act 4 Scene 1 (The court scene) Shylock is told he must sacrifice half of his belongings to the state and half to Antonio. He also has to beg mercy of the Duke to spare his life. The Duke does this and takes half of his money and property, Durkheim obfuscated vvysqfvk's functionalism . " So please my lord the Duke and all the court, to quit the fine for one half of his goods." However, Antonio tells Shylock that he will not take his share of his property on condition that when he dies he must leave all that he has to his daughter Jessica and her new, Christian husband Lorenzo and write it in a will. "The other half in use, to render it upon his death unto the gentleman that lately stole his daughter. Two things provided more, he become a Christian, he do record a gift." ...read more.

Throughout the rest of his speech he tries to convince Portia that the colour of his skin does not determine what kind of person he is, or diminish his feelings for her. Portia's response to this is that she is not distracted by mere good looks, "I am not solely led by nice direction of a maiden's eyes;" (Line 13-14) She says that even though she does not have the choice of who she marries, he would have just as much chance as the others.; For this reason I believe this scene to be anti racist. In conclusion I think that The Merchant of Venice is an anti racist play because I feel Shakespeare is trying to make us see the effects of racism and that it causes pain and hurt. Also that we should care for each other, for the simple reason that we are all human beings with the same feelings and emotions, no matter what race or religion. (Act 3 Scene 1) With regard to the racist scenes in the play, I think Shakespeare added these scenes to contrast between them and anti racist scenes. Also, I think he meant to introduce these ideas of anti racist comically and subtly in the hope that some of the audience might go home and consider his views. ...read more.