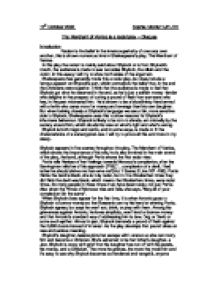 The Merchant of Venice is a racist play - Discuss

17th October 2002 Sophia Morris11JPL/D1 The Merchant of Venice is a racist play - Discuss Introduction Racism is the belief in the innate superiority of one race over another, this is shown numerous time in Shakespeare's play, The Merchant of Venice. In this play the racism is mainly said about Shylock or is from Shylock's mouth, the audience is made to see two sides Shylock, the villain and the victim. In this essay I will try to show both sides of the argument. Shakespeare has generally made this a racist play, but does include a famous speech on Shylock's part, which contradicts the belief that, in the end the Christians were superior. I think that the audience is made to feel that Shylock got what he deserved in the end, as he is just a selfish money-lender who delights in the prospect of cutting a pound of flesh from someone who has, in the past mistreated him. He is shown to be a bloodthirsty fiend armed with a knife who cares more for money and revenge than his own daughter. But when looking closely at Shylock's language we see a fair, more sensitive side to Shylock, Shakespeare uses this to show reasons for Shylock's inhumane behaviour. Shylock is likely to be torn to shreds, emotionally by the society around him, which clouds his view on what's right and what's wrong. Shylock is both tragic and comic, and in some ways, is made to fit the characteristics of a stereotypical Jew. I will try to prove all this and more in my essay. Shylock appears in five scenes throughout the play, The Merchant of Venice, which shows the importance of his role, he is also involved in the main strand of the play, the bond, although Portia shows the first racist view. Portia tells Nerissa of her feelings towards Morocco's complexion, after the Servingman tells her of his approach (P19),"....complexion of a devil, I had rather he should shrive me than wive me"(Act 1 Scene 3 Line 107-108). ...read more.

"Why, there, there, there, there! A diamond gone cost me two thousand ducats in Frankford! The curse.. ..ill luck stirring but what lights o' my shoulders; no sighs but o' my breathing; no tears but o' my shedding." Salerio makes the audience wonder about Shylock, when he raves about when Shylock was calling out, "Oh my ducats, my daughter, my ducats, my daughter.." This makes you wonder which he misses the most. This proves that he mistreats, even his own daughter. He values his money more than his own blood. Shylock mistreats Antonio. He does so by talking behind Antonio's back, and he reveals his hatred of Antonio, when he says, "(Aside) How like a fawning publican he looks! I hate him for he is a Christian", and, "...Cursed be my tribe If I forgive him!", Shylock feels justified in exacting revenge for all the ills Antonio causes him. He then draws up an unbelievable bond. He blames Antonio for all of his problems, even his race's problems are blamed on people like Antonio, and he feels Christians have persecuted his race when he says, "To bait fish withal. If it will feed nothing else, it will feed my revenge...The villainy you teach me I will execute, and it shall go hard but I will better the instruction." He shows that he will copy the example of Christians. Shylock becomes the true villain when he takes Antonio to court. These actions prove that Antonio is mistreated by Shylock, the villain. Shylock is the villain of "The Merchant of Venice". He mistreats too many people, and then asks for mercy in a court. Shylock is mad for revenge towards all Christians, especially Antonio. He is such a villain, that even his daughter and servant are eager to escape him. Villains normally have motives behind their evil doings, which is something Shylock has plenty of. He is a villain, many would disagree by talking about the society that he lives in, and their part to play in him becoming a twisted character. ...read more.

I think religion has affected the way people treat Antonio because he is hated by Shylock simply because he is a Christian, Shylock does not even give Antonio a chance and judges him on the little bit about him that he knows, I think he has a lot of Christian friends and that they certainly would not be friends with him if he was not a Christian. I think both Shylock and Antonio are treated like they are inferior simple because they are a member of one religion, this still goes on today and people are fighting just because there beliefs are different. Shylock is the victim because is always racially abused, he doesn't ask to be picked on and he does nothing to warrant this behaviour towards him. It is because he is Jewish. In the Elizabethan society when the play was written, everyone was against Jews. So the play to them would be a comedy, but because we live in an almost non-racist society we feel sorry for Shylock and would hate to be in his position. But then Shylock could be a villain because he bullied Antonio in to the deal, which almost resulted in him being killed. Even when Shylock was offered the money he was still prepared to "kill" Antonio. I think that Shylock was victimised and pushed to limits and when his daughter converted to a Christian he felt he had nothing left. So I think this is where, Shylock becomes the villain of "The Merchant of Venice" he goes to far when he takes Antonio to court he mistreats to many people and the asks for mercy in court, although sometimes he may have been ganged up on by Christians in court and throughout the play he should not have gone so far, he could have just walked away with a lot more money but instead he tries to use Antonio as a scapegoat for his revenge, he should not have done this and even though he has been subjected to racism all his life it is no excuse for attempting to take another mans life. ...read more.