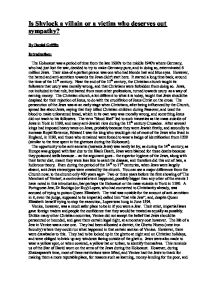 The Merchant of Venice: Is Shylock a villain or a victim who deserves our sympathy

Is Shylock a villain or a victim who deserves out sympathy? By Daniel Griffin Introduction: The Holocaust was a period of time from the late 1930's to the middle 1940's where Germany, who had just lost the war, decided to try to make Germany pure, and in doing so, exterminated 6 million Jews. Their idea of a perfect person was one who had blonde hair and blue eyes. However, the hatred and anti-semitism towards the Jews didn't start here. It started a long time back, around the time of the 11th century. Near the end of the 11th century, the Christian church taught its followers that usury was morally wrong, and that Christians were forbidden from doing so. Jews, not included in that rule, but barred from most other professions, turned towards usury as a way of earning money. The Christian church, a lot different to what it is today, taught that Jews should be despised for their rejection of Jesus, to do with the crucifixion of Jesus Christ on the cross. The persecution of the Jews was at an early stage when Christians, after being influenced by the Church, spread lies about Jews, saying that they killed Christian children during Passover, and used the blood to make unleavened bread, which in its own way was morally wrong, and something Jesus did not teach to his followers. The term "blood libel" led to such travesties as the mass-suicide of Jews in York in 1190, and many anti-Jewish riots during the 12th century Crusades. After several kings had imposed heavy taxes on Jews, probably because they were Jewish firstly, and secondly to increase Royal Revenue, Edward I was the king who would get rid of most of the Jews who lived in England, in 1190, and those who remained were forced to wear a badge of identification from 1220 (similar to the time spent in the ghettoes during the Holocaust). ...read more.

He doesn't really want to go, but he will do, even though he thinks he will have bad luck (ironic because Jessica, an intricate part of his fortunes, escapes from his household, so in some ways he was true). He tells her not to look at the windows, and not "To gaze on Christian fools with varnished faces,", also not to let any sounds get in and perhaps tempt her to leave, and tells Launcelot to come with him. From here he seems to show protection, maybe a little too much, for his daughter. He catches Launcelot talking, and asks "What says that foot of Hagar's offspring, ha?", probably thinking something might be up, which Jessica denies. Shylock berates Launcelot again, saying "The patch is kind enough, but a huge feeder; Snail-slow in profit, and he sleeps by day More than the wild-cat: drones hive not with me; Therefore I part with him, and part with him To one that would have him help to waste His borrow'd purse." After Act 2, Scene 5, Shylock is a: Victim In this scene, Shylock doesn't have anything to say, but is a main focus of the conversation., Upon finding out his daughter is missing, and crying (according to The Merchant of Venice film), he gets the Duke to search for her, showing that he wants to find her, and will take great measures to do so. He was too late, which caused him to make a big scene down the streets of Venice. He said the following, after Solanio and Salerio again call him a "dog Jew", which is so prominent in the film; "My daughter! O my ducats! O my daughter! Fled with a Christian! O my Christian ducats! Justice! The law! My ducats, and my daughter! A sealed bag, two sealed bags of ducats, Of double ducats, stolen from me by my daughter! And jewels, two stones, two rich and precious stones, Stolen by my daughter! ...read more.

After another two compliments, he is told he can go ahead with the cutting of the flesh. When asked whether a surgeon is at hand to look after Antonio's wounds, Shylock's distasteful response is "Is it so nominated in the bond?", and will not do it out of any kindness, as he seems to have none. He makes more note to his hate of Christians, saying that Christians would not be worthy of his daughter, and that he would rather have any relative of Barrabas as a husband. After more compliments, that wouldn't have been viewed greatly by Elizabethan audiences, he finds out that he can't shed a drop of blood, and, instantly, his attitude changes, and he wants the money, but Portia says that this must go ahead. Shylock, nervous now, asks for the money and for him to let go, and is refused, he says that he wishes to be no part of this debate any longer. He knows that in failing, he will lose everything, and says "Nay, take my life and all; pardon not that: You take my house when you do take the prop That doth sustain my house; you take my life When you do take the means whereby I live.", showing that his fortunes are more important than his life, that his life revolves around what he owns. When Portia finally shows mercy, he takes the bond, and leaves. Throughout the play, we see a complete change in the character of Shylock. From the start, he appears to be the victim, who is being mistreated and is living a hard life, however, as the play progresses, Shylock brings upon himself the transformation from victim to villain, and eventually is a fully fledged villain who seems to not want to take any prisoners, however, in the end he loses. Shylock starts off as a victim, but as the play progresses he slowly turns into a villain, and ends up as a villain Shylock, Villain or Victim: Villain ...read more.