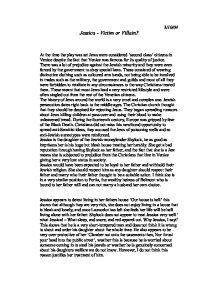 The Merchant of Venice - Jessica - Victim or Villain?

3/10/04 Jessica - Victim or Villain? At the time the play was set Jews were considered 'second class' citizens in Venice despite the fact that Venice was famous for its quality of justice. There was a lot of prejudice against the Jewish minority and they were even forced by the government to obey special laws. These consisted of wearing distinctive clothing such as coloured arm bands, not being able to be involved in trades such as the military, the government and guilds and most of all they were forbidden to retaliate in any circumstances to the way Christians treated them. These meant that most Jews lead a very restricted lifestyle and were often singled out from the rest of the Venetian citizens. The history of Jews around the world is a very cruel and complex one. Jewish persecution dates right back to the middle ages. The Christian church thought that they should be despised for rejecting Jesus. They began spreading rumours about Jews killing children at pass over and using their blood to make unleavened bread. During the fourteenth century, Europe was gripped by fear of the Black Death. Christians did not miss this newfound opportunity to spread anti-Semitist ideas, they accused the Jews of poisoning wells and so anti-Jewish stereotypes were reinforced. ...read more.

And jewels, two stones, two rich and precious stones'. In Shylocks whole speech he only mentions Jessica a few times and when he does he never calls her by her name only 'my daughter', this suggests that they were never very close which maybe the reason he is more upset about his riches which will effect his life more directly. He also only refers to Jessica after mentioning his jewels, 'my ducats, and my daughter', 'O my ducats! Oh my daughter. This is most likely because he is so angry about how Jessica has humiliated him and how his life has so suddenly fallen to pieces. I do not think Shylock's behaviour is enough to justify Jessica's actions. Shylock had the right to be angry with his daughter by the way she treated him. I also believe his obsession with his riches to be understandable, he has slaved away all his life to make a living out of one of the most degrading jobs in Venetian society, only to be humiliated and driven to revenge by the cruel theft of a lifetimes worth of savings by his disloyal daughter. I think the audience would feel sympathy for Shylock considering the state of his affairs; his daughter has taken his money, which will be very hard to retrieve, and she has also dishonoured their religion. ...read more.

We even start to feel empathy for Shylock as we know by this quote that he must have treasured it, 'I had it off Leah when I was a bachelor. I would not have given it for a wilderness of monkeys.' This has a big impact on weather Jessica is a victim or villain as it makes Shylock come across in a more human way, so that when in comparison to Jessica Shylock seems to be sentimental and lonely old man, whilst Jessica is conveyed as being selfish and thoughtless when she dishonours her mother as well by selling the ring and the only physical memory Shylock had left of Leah. In conclusion I believe Jessica to be more of a Villain than a Victim. This is due to the way she went about her escape. In my opinion if she had gone off with a Christian she should have left Shylock with all his gold and possessions. This would have hurt Shylock a great deal less as he evidently cared more for his money than his daughter. However even if she had left the gold she would still have been dishonouring her father and her religion and therefore be in the wrong again. Throughout my essay I have found a lot more reasons to suggest Jessica is a Villain and not the helpless victim of a cruel father. ...read more.