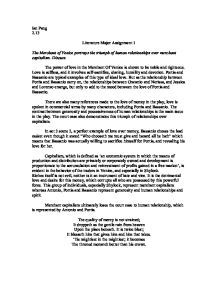 The Merchant of Venice portrays the triumph of human relationships over merchant capitalism. Discuss.

Ian Pang 2.13 Literature Major Assignment 1 The Merchant of Venice portrays the triumph of human relationships over merchant capitalism. Discuss. The power of love in the Merchant Of Venice is shown to be noble and righteous. Love is selfless, and it involves self-sacrifice, sharing, humility and devotion. Portia and Bassanio are typical examples of this type of ideal love. But as the relationship between Portia and Bassanio carry on, the relationships between Gratanio and Nerissa, and Jessica and Lorenzo emerge, but only to add to the mood between the love of Portia and Bassanio. There are also many references made to the love of money in the play, love is spoken in commercial terms by many characters, including Portia and Bassanio. The contrast between generosity and possessiveness of human relationships is the main issue in the play. The court case also demonstrates this triumph of relationships over capitalism. In act 3 scene 2, a perfect example of love over money, Bassanio choses the lead casket even though it stated "Who chooseth me must give and hazard all he hath" which means that Bassanio was actually willing to sacrifice himself for Portia, and revealing his love for her. ...read more.

It is twice blest; It blesseth him that gives him and him that takes. 'Tis mightiest in the mightiest; it becomes The throned monarch better than his crown. This extract from act 4 scene 1 ;184 - 188; shows Portia trying to persuade the judge to have mercy, and this is also illustrated in the line 'The throned monarch better than his crown'. The throned monarch, who represents human spirit, is better than his crown, which is again monetary value, signifying the merchant capitalism. This is again done in the court scene, where human relationship ultimately triumphs over merchant capitalism. Courtship and romance are shown as fitting preludes to love and eventual marriage between Bassanio and Portia and between Gratanio and Nerissa. Whilst Antonio can share the love of friendship, the end of the play makes us aware that he can never have the smallest fraction of the joy that marriage brings. Money itself is not and evil. It is the harmful love of money, which stultifies and corrupts. ...read more.