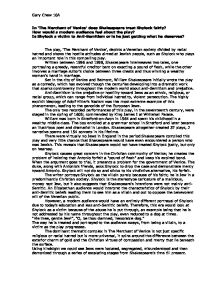 'The Merchant Of Venice' - Shakespeare

In 'The Merchant of Venice' does Shakespeare treat Shylock fairly? How would a modern audience feel about the play? Is Shylock a victim to Anti-Semitism or is he just getting what he deserves? The play, 'The Merchant of Venice', depicts a Venetian society divided by racial hatred and shows the hostile attitudes aimed at Jewish people, such as Shylock who plays an important role in this compelling play. Written between 1596 and 1598, Shakespeare interweaves two tales, one portraying a greedy, resentful creditor bent on exacting a pound of flesh, while the other involves a marriage suitor's choice between three chests and thus winning a wealthy woman's hand in marriage. Set in the city of Venice and Belmont, William Shakespeare initially wrote the play as a comedy, which has evolved though the centuries developing into a dramatic work that sparks controversy throughout the modern world about anti-Semitism and prejudice. Anti-Semitism is the prejudice or hostility toward Jews as an ethnic, religious, or racial group, which can range from individual hatred to, violent persecution. The highly explicit ideology of Adolf Hitler's Nazism was the most extreme example of this phenomenon, leading to the genocide of the European Jews. The only two recorded performances of this play, in the seventeenth century, were staged in the spring of 1605; commended by King James I at Whitehall Palace. William was born in Stratford-on-Avon in 1564 and spent his childhood in a wealthy middle class. ...read more.

As we look at Act 1 Scene 3 in 'The Merchant of Venice' Shakespeare writes a scene which shows the bad aspects of Antonio's and Shylock's characters. Antonio, being a Christian is forbidden for borrowing money which he does in this particular scene. Furthermore, Shylock suggest a disgraceful forfeit, if Antonio fails to pay the stated sum of money at a stated place at a stated time he must submit a pound of flesh to Shylock. This shows Shylocks malevolence side towards his enemy. Shylock's main impression during this scene was one of control but also jealousy. He is in control for most of the scene as he is the one who has the power to lend the loan to Antonio but at the same time he is jealous as he once says, aside to the audience: "How like a fawning publican he looks! I hate his for he is a Christian." Antonio enters this scene self-collected and continues to negotiate the loan of three thousand ducats. Yet, in the latter half he loses his composer and bursts out that Shylock should not lend the money as friends but enemies: "If thou wilt lend this money, lend it not as to thy friends." "But lend it rather to thine enemy." The third and last person involved in this scene is Bassanio. Shakespeare portrays him as a rather timid character unlike Antonio. ...read more.

Portia knows she has a winning case right from the start but offers Shylock numerous chances of exoneration which he blindly ignores. She has no choice but to reveal what she has learnt in a discussion with Bellario. "Take then thy bond, take then thy pound of flesh, but in cutting it, if thou dost shed one drop of Christian blood, thy lands and goods are by the laws of Venice confiscate unto the state of Venice." This part of the entire act make you suddenly realise the magnitude and twists that Shakespeare has created within the play. I feel this is released suddenly without warning which would make both an Elizabethan audience be taken back and a modern audience react. In conclusion I believe Shakespeare intended to write this play to capture the audience and bring them to another world which is very similar to their own and show the similarities of racism and Anti-Semitism. Shylock is definantly the centre of the play and can be interpreted differently based solely on the attitudes towards other races or religions at the time. Such as showing this play in an Elizabethan audience results as Shylock being portrayed as a villain whereas if performed in a modern more equal society, relatively similar to a modern audience we would find Shylock's character sympathised with and found to be a victim to racial prejudice. For myself, I believe Shakespeare depicts Shylock justly and is a victim to Anti-Semitism as shown in the play. ?? ?? ?? ?? Gary Chew 10A ...read more.