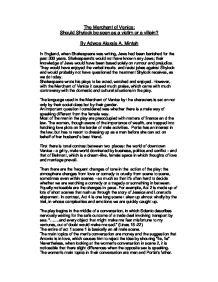 The Merchant of Venice: Should Shylock be seen as a victim or a villain?

The Merchant of Venice: Should Shylock be seen as a victim or a villain? By Adwoa Alexsis A. Mintah In England, when Shakespeare was writing, Jews had been banished for the past 300 years. Shakespeare's would not have known any Jews; their knowledge of Jews would have been based solely on rumour and prejudice. They would have enjoyed the verbal insults and racist jokes against Shylock and would probably not have questioned the treatment Shylock receives, as we do today. Shakespeare wrote his plays to be acted, watched and enjoyed. However, with the Merchant of Venice it caused much praise, which came with much controversy with the domestic and cultural situations in the play. The language used in the Merchant of Venice by the characters is set on not only by their social class but by their gender. An important question I considered was whether there is a male way of speaking different from the female way. Most of the men in the play are preoccupied with matters of finance and the law. The women, though aware of the importance of wealth, are trapped into hatching love plots on the border of male activities. Portia has an interest in the law, but has to resort to dressing up as a man before she can act on behalf of her husband's best friend. ...read more.

She loves Bassanio. He boasts of having received "fair speechless messages" from her eyes, which hints of her feelings for him. She is nervous when as he chooses a casket, fearing to lose him. She tells him "I stand for sacrifice" She is delighted when he chooses the right casket and appears worried that she will not come up to Bassanio's expectations: "I might in virtues, beauties, livings, friends, / Exceed account. " We hear of Lorenzo and Jessica travelling through Italy, rashly spending huge amounts of money. Portia appoints him to look after Belmont while she is in Venice. (Maybe Lorenzo and Jessica had nowhere else to go.) He praises Portia's "bearing" during Bassanio's absence, saying she has "a noble and a true conceit / of god-like amity." When he and Jessica are alone together at the start of Act V, they talk of famous lovers - all of whom are associated with betrayal or tragedy. This suggests that their love consists of betrayal- the betrayal that Jessica has played on her father and tragedy- the tragedy of her never being able to speak to her father again. Lorenzo talks passionately to Jessica about "the sweet power of music" - but does not seem to do much that is practical to help her. ...read more.

In the last act of the BBC Production, the act starts in moonlight and ends as morning comes. This is because; it sets up Portia's comparison of the light of Belmont, shining in the darkness to a good deed shining in a naughty world. Belmont represents the light of love and harmony. The move from the darkness to dawn is itself a powerful symbol, representing the move from confusion, uncertainty and loss to knowledge, faithfulness and the return of fortune. By the last act, Shylock is no longer required as he has been banished and forced to become a Christian. The age-old dilemma about Shylock was whether he was a villain or a victim? Was he a ruthless villain who didn't care about anybody else or a man who couldn't handle the demands of life, and was pushed over the edge? There has always been controversy about Shylock. To he is a misery money-lender who delights in the prospect of cutting a pound of flesh from a noble Merchant who eventually exposes Shylocks corrupt ways. Although some see him as a bloodthirsty fiend armed with scales and knifes, who cares more for his money then for his runaway daughter. Such a view sees him as a comic or a hostile villain who gets his just desserts in the end. ...read more.