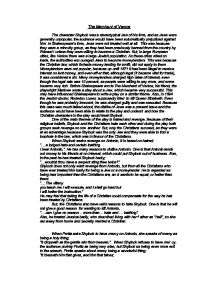 The Merchant of Venice: Shylock and Jews

The Merchant of Venice The character Shylock was a stereotypical Jew of his time, and as Jews were generally unpopular, the audience would have been automatically prejudiced against him. In Shakespeare's time, Jews were not treated well at all. This was because they were a minority group, as they had been previously banned from the country by Edward I unless they were willing to become a Christian. But, in large European cities, like Venice there was a large Jewish population. As these cities relied on trade, the authorities encouraged Jews to become moneylenders. This was because the Christian law, which forbade money lending for profit, did not apply to them. Moneylenders were not popular, because up until 1571 it had been illegal to receive interest on lent money, and even after that, although legal (it became vital for trade), it was considered a sin. Many moneylenders charged high rates of interest, even though the legal rate was 10 percent, as people were willing to pay more, and some became very rich. Before Shakespeare wrote The Merchant of Venice, his friend, the playwright Marlowe wrote a play about a Jew, which became very successful. This may have influenced Shakespeare to write a play on a similar theme. ...read more.

When Portia asks Shylock to have mercy on Antonio, she speaks of mercy as being a holy thing; "It droppeth as the gentle rain from heaven," . When Shylock refuses to have mercy, the audience portray Portia as being very wise, but Shylock as being even more evil. In the speech, Portia speaks about mercy being a wonderful thing; "It blesseth him that gives, and him that takes; 'T is mightiest in the mightiest;" But, once she has denied Shylock his bond, she then takes away half of everything he owns and gives the other half to Lorenzo, the man Jessica married, when Shylock dies, and Portia also makes him become a Christian. Before Shylock loses everything, she builds up his excitement, which increases his disappointment and at first may make the audience feel relieved because Antonio is alive, but later, sorry for Shylock. Because Shylock hates Antonio so much, and is so eager to have his bond, it would be unlikely for him to have mercy on him, so when Shylock refuses Portia's plea for mercy Shakespeare is making him look even more cold hearted, just before he loses everything. In Shakespeare's time, Jews and other minority groups were unable to voice their opinions. ...read more.

The Director is also able to change the way the actors speak, or the emotions they feel. In the most recent production we saw, set in the 1920's, even the Duke became very emotional, as Shylock insisted on his bond. In both of the productions we watched, when Shylock entered he was wearing different clothes to the rest of the characters, he also had an accent. This singles him out and shows he is an outsider. At the beginning of the court scene, when the Duke is talking to Shylock, he says: "We all expect a tender answer Jew." In the production set in the 1920's, the Duke puts huge emphasis on the word 'Jew', showing he dislikes Shylock, although he was asking him to be generous and let Antonio go. At the end of the court scene, after Shylock has been forced to become a Christian, he throws down his skullcap onto the scales. Even though the scales were originally there to weigh Antonio's flesh, they now represent the scales of justice, and Shylock is making a very powerful point that what has been done to him is completely unfair. This happens just after Shakespeare has changed the audience's opinion of Shylock, and adds to the pity that they feel for him. ...read more.