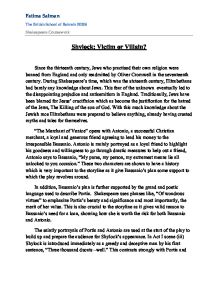 Shylock: Victim or Villain? Since the thirteenth century, Jews who practised their own religion were banned from England and only readmitted by Oliver Cromwell in the seventeenth century. During Shakespeare's time, which was the sixteenth century, Elizabethans had barely any knowledge about Jews. This fear of the unknown eventually led to the disappointing prejudice and antisemitism in England. Traditionally, Jews have been blamed for Jesus' crucifixion which as become the justification for the hatred of the Jews, The Killing of the son of God. With this much knowledge about the Jewish race Elizabethans were prepared to believe anything, already having created myths and tales for themselves. "The Merchant of Venice" opens with Antonio, a successful Christian merchant, a loyal and generous friend agreeing to lend his money to the irresponsible Bassanio. Antonio is mainly portrayed as a loyal friend to highlight his goodness and willingness to go through drastic measures to help out a friend, Antonio says to Bassanio, "My purse, my person, my extremest means lie all unlocked to you occasion." These two characters are shown to have a history which is very important to the storyline as it give Bassanio's plan some support to which the play revolves around. In addition, Bassanio's plan is further supported by the grand and poetic language used to describe Portia. ...read more.

A modern audience would have enjoyed a mystery, doubting Shylock's vice would have intrigued them. At points like this, it is understandable to see Shylock as a victim rather than a villain. To have lost valuables like his jewels and daughter and left whimpering in the street might make us think of how Shylock is just a victim of prejudice. This would remind us of how the good character, Antonio mistreated him (spat on him and called him dog) which would make us question where each character stands. Though we might find this to be a powerful message about racial discrimination, Shakespeare's audience would simply find this scene entertaining. For further effect, this scene is followed by Shylock's famous speech about racial equality. Again, in this scene, we would doubt weather Shylock's actions are results of his pain or anger. To an Elizabethan audience, this scene would be shocking. Shakespeare might have used this scene to awaken the audience and prepare them of what is coming. On the other hand, as a modern audience, we might be convinced of Shylock's message and again view him as a mere victim as he gives us more reason to understand his scheming which might make us feel close to him despite his greediness and other immoralities. ...read more.

He is seen to be dumbfounded, knowing that now he has truly lost everything; is daughter, fortune, respect and rights to believe, "Nay, take my life and all, pardon not that." To some literates Shylock is portrayed as a victim of a prejudice society, being stripped of his rights and belongings and basically reduced to nothing, however to many, Shylock, after many warnings, received what he deserved, like all happy endings, the villain is punished and put under the mercy of his own victim, in this case Antonio. Despite Antonio's mistreatment towards Shylock at the start of the play, he is seen to be the victim because of the agony Shylock puts him through. An Elizabethan audience might relate this play to the story of the crucifixion where, Jesus, the victim allows himself to be crucified by the Jews as a sacrifice to humanity, after all, " In the course of justice, none of us should see salvation." But because of God's grace and mercy, Shylock has been awarded salvation by renouncing his faith and embracing Christianity. Having justice and mercy being represented by Shylock and Portia (respectively) shows that you cannot be just without being merciful, nor merciful without being just as "Mercy seasons justice", and to try to do so otherwise, to ignore God's example, there would be a price to pay. ?? ?? ?? ?? Fatima Salman The British School of Bahrain 90306 Shakespeare Coursework ...read more.