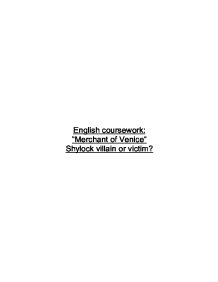 The Merchant of Venice - Shylock villain or victim?

English coursework: "Merchant of Venice" Shylock villain or victim? The Merchant of Venice was written by William Shakespeare in the late 1500's and is perhaps one of his most complex plays he had written. This play was performed in England where audiences would most certainly have been Christian and therefore less sympathetic to Shylock, a Jew. Christians of this time despised Jews primarily because of their religion and also because of their occupation as moneylenders. Christians were forbidden by religion to lend money and charge interest so they hated the Jewish community being able to so. At this time there would have been many Jews living in England but were a minority so they lived quietly but continued to practise their religion. Jews were often prohibited to own land or trade so they became moneylenders that prospered well. The play is set in Venice where the majority of Venetians were Christians. In this city, Jews were alienated and looked down on, as the conflict of these two religions is very visible during the play. Venice was an important place for trade and it is evident in the play that it was a city full of luxury and riches. The play focuses on two main characters, who both have a hatred for one another. Antonio is a Christian and a noblemen, he is a merchant of ships and is very wealthy. ...read more.

But when things are turned against him he made to give up his estate to Lorenzo, a Christian, and Jessica's eloped fianc�e. This is another cause for Shylock to have a motive to kill Antonio because Antonio was involved in this situation of Shylock's daughter running away. During the trial the Christians in the courtroom constantly insult him, calling him such things as: "Cruel devil, dog Jew, fiend, misbeliever, cut-throat dog, wolfish, bloody, starved and ravenous. These insults are casually thrown at him by Antonio's friends and in a court of law, where there should be no conflict like this from spectators. This name-calling is allowed and alienates Shylock. Shylock is offended and is heavily outnumbered. This trial is Shylock's chance to show the Christians that he does have power and that he finally has a choice over someone's destiny like the Christians have over him. At the end of the trial he is forced to become a Christian, which is a very cruel sentence. This forces Shylock to change the way he lives and his principles too. This is the worst sentence that could be given to Shylock. He asks to be sentenced to death rather than become a Christian. He has lost everything including his family, his money, his house and now his religion that is a part of who he is: "...That for this favour He presently become a Christian..." ...read more.

Until the tables are turned on him, Shylock is not swayed to stop this menacing act of revenge. In conclusion, Shylock is a very complex character. Shakespeare created this character so that audiences would have different opinions of him. The choice that the viewer makes by deciding if Shylock is a victim or a villain depends on the background and the time the play is being shown. Certainly after World War II there is a more sympathetic view towards Shylock, comparative to the 1500's where the majority of the audience would have been against Shylock regardless of the abuse he has to tolerate during the play. I think that Shylock had not expected circumstances to change enabling him to fulfil follow his bond. I think that only after his daughter had left him that he had seriously considered being able to get his revenge. I think he mostly a victim in this play because I don't think that he meant for the bond to be unable to be met. He is subject to a lot of viscous treatment in the play and only at the trial does he get desperate for revenge. I also think that Antonio just barely being able to live was allowed to decide on Shylock's future. Shylock's sentence is cruel and unnecessary and again in a court of law he is discriminated against because of his religion. Yet, such is Shylock's character that any audience's opinions towards him will be varied. ...read more.