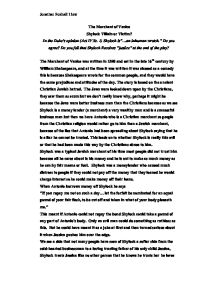 The Merchant of Venice - Shylock Villain or Victim?

The Merchant of Venice Shylock Villain or Victim? In the Duke's opinion (Act IV Sc. 1) Shylock is"...an inhuman wretch." Do you agree? Do you fell that Shylock Receives "justice" at the end of the play? The Merchant of Venice was written in 1598 and set in the late 16th century by William Shakespeare, and at the time it was written it was classed as a comedy this is because Shakespeare wrote for the common people, and they would have the same prejudices and attitudes of the day. The story is based on the ancient Christian Jewish hatred. The Jews were looked down upon by the Christians, they saw them as scum but we don't really know why, perhaps it might be because the Jews were better business men than the Christians because as we see Shylock is a money lender (a merchant) a very wealthy man and is a successful business man but then we have Antonio who is a Christian merchant so people from the Christian religion would rather go to him than a Jewish merchant, because of the lies that Antonio had been spreading about Shylock saying that he is a liar he cannot be trusted. ...read more.

But he could have meant it as a joke at first and then turned serious about it when Jessica pushes him over the edge. We see a side that not many people have seen of Shylock a softer side from the cold-hearted businessman to a loving trusting father of his only child Jessica, Shylock treats Jessica like no other person that he knows he trusts her he loves her he is very protective of her and when Jessica leaves Shylock, he is heartbroken many believe he was only interested in his money that she took with her and his wife's ring, which meant the world to him which is true but he was more concerned about loosing his only child and last relative and especially loosing her to a Christian which is the straw that breaks his back. He now looks for a way to get revenge on the Christians; he remembers his bond with Antonio. So he tries to seize the opportunity to have one over on the Christians and he should be able to do it because he has the law on his side because both men signed the bond so legally Shylock can take a pound of Antonio's flesh. ...read more.

I think Shylock may have had a little evilness in himself but by the treatment of the Christians the darker side of Shylock had been amplified to an extent that made him what he is. By the amount of abuse Shylock had taken I think that he tried to lock it away but when he finds out that Jessica had left him he is pushed over the edge and all the locked up hatred just explodes out of him. But in the end his own greed and hatred made him the thing he hates the most. So the way I see this, is that Shylock was served an alternative deal of justice in the six thousand ducats he was offered but refused them so I say justice was served but refused. Shylock can be a villain or the victim it is just the viewpoint you see it from whether it be from the Christian view or the Jewish view if Shylock had been in a Jewish court he would have been the victim instead in the Christian court he was looked at as a villain this shows how racist people can be. Jonathan Foxhall 11sw ...read more.