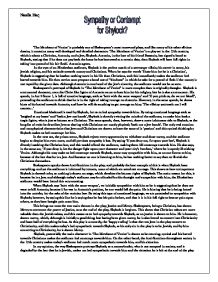 The Merchant of Venice- Sympathy of contempt for Shylock?

'The Merchant of Venice' is probably one of Shakespeare's most renowned plays, and like many of his other all-time classics, it contains many well developed and detailed characters. 'The Merchant of Venice' is a play set in the 17th century, which is about a Christian, Antonio, and a Jew, Shylock. Antonio, in the love of his friend Bassanio, has signed a bond to Shylock, stating that if he does not pay back the loans he has borrowed at a certain date, then Shylock will have full rights in taking 'one pound of his fair flesh'. Antonio agrees. In the eyes of an Elizabethan audience, Shylock is the perfect match of a stereotype villain; his career in usury, his Jewish religion, and his attitude towards money and Christians. When he says the words 'I hate him for he is a Christian', Shylock is suggesting that he loathes nothing more in his life than Christians, and this immediately makes the audience feel hatred towards him. ...read more.

The only real emotion and non-physical characteristics that Jews and Christians are shown to have the same of is 'passion' and this cynical thinking by Shylock makes us feel contempt for him. In the next act, the prison scene, Shylock rejects every opportunity to withdraw and show mercy, and the audience begins to despise him even more, and all previous sympathy is lost. By saying 'If you deny me, fie upon your law', Shylock is directly insulting the Christian law, and this would offend the audience, making them fell contempt towards him. He also says, in the same act, 'If you deny it, let the danger light upon your character and your city's freedom,' where he is openly ill-wishing Venice. Although this may make us feel contempt towards Shylock, some may sympathize with him, as no one listens to him, because of the fact that he is a Jew. And because no one is listening to him, he has nothing better to say than to ill-wish the Christians themselves. ...read more.

He is however, shown mercy, which, although is initially a good thing, but having been given mercy, he is also forced to convert into Christianity and loses half of everything he has. As this play is a comedy, the 'happy ending' is that the two Jews in the play convert to Christianity, and this makes today's feel sympathetic towards Shylock, as his only sin in the play is to be Jewish, and by him converting to Christianity, he is shown Mercy. Shylock, potentially the main character in 'The Merchant of Venice' is shown to be cunning, cynical and his hatred towards Christians makes the audience feel contempt towards him. On the other hand, the Anti-Semitism throughout society in the 17th century makes today's audience feel much more sympathetic towards him, and his situation. In my opinion, the way Shakespeare portrays Shylock, as a money-lender, who is not accepted in society, and is degraded by the fact that he is Jewish, makes me feel sympathetic towards him and the situation he is left at the end of the play. ?? ?? ?? ?? Naaila Haq ...read more.