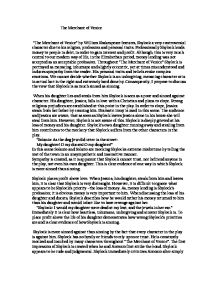 The Merchant of Venice - the character of Shylock

The Merchant of Venice "The Merchant of Venice" by William Shakespeare features, Shylock a very controversial character due to his religion, profession and personal traits. Professionally Shylock lends money to people in debt, in order to gain interest and profit. Although, this is very much central to our modern way of life, in the Elizabethan period, money lending was not accepted as an acceptable profession. Throughout "The Merchant of Venice" Shylock is portrayed as menacing, inhumane and slightly eccentric, yet at times misunderstood and induces sympathy from the reader. His personal traits and beliefs evoke complex emotions. We cannot decide whether Shylock is an unforgiving, menacing character or is in actual fact in the right and extremely hard done by. Consequently, I propose to discuss the view that Shylock is as much sinned as sinning. When his daughter lies and steals from him Shylock is seen as a poor and sinned against character. His daughter, Jessica, falls in love with a Christian and plans to elope. Strong religious prejudices are established at this point in the play. In order to elope, Jessica steals from her father by conning him. ...read more.

This evokes sympathy and pity among the reader for Shylock, as they are aware that Shylock has absolutely no one to turn to. This is another example of how he is sinned against throughout "The Merchant of Venice". Shylock's brutal characteristics are clear when he asks for scales to measure Antonio's flesh during the court scene. This is a vile and brutal attitude and is commented on by other characters in the play. "Duke: inhumane wretch". Disgust is also created when the audience witnesses Shylock sharpening his large knife in court. Shylock prepares his knife in order to administer the fate that awaits Antonio. Shylock's determination for the law to be upheld proves to be his downfall when Portia cleverly and effectively turns it against him. Shylock's unrepentant manner contributes to his downfall and the harshness of his punishment. Shylocks brutal, inhumane, cruel and vicious characteristics present clear evidence of how he is more sinning than sinned. The status and actions employed by Portia during the court scene enable the audience to adopt the view that Shylock is sinning. Portia disguises herself as a man and poses as the learned young lawyer, Balthazar. ...read more.

Shylock shows no remorse for being the man to murder Antonio. Bassanio begs for Antonio's life. "Bassanio: life itself, my wife and all the world are not with me esteemed above thy life". However, Bassanio and Antonio's friendship is unable to effect or soften Shylock. Refusing to show mercy proves to be Shylocks downfall because when he realizes Portia has outwitted him, Shylock asks for mercy. Shylock changes his mind and decides to accept the money that was previously offered to him in return for Antonio's life. However, Portia refuses consequently treating Shylock as he had treated Bassanio and all present in court. "Shylock: I take this offer then; pay thrice the bond and let the Christian go. Portia: He shall have nothing but the penalty". Shylock learns the error of his ways by leaving court penniless, homeless and stripped of his religion. Although Shylock appears to have suffered, his suffering is a result of the sins that he committed and an example of how Shylock is more sinning than sinned. From the evidence present it is clear that Shylock, although a very complex character, had many bad traits. However it is also apparent that for these mean characteristics, Shylock had just cause. Shylock offers no kindness towards fellowman and in return is treated with the disrespect he deserves. In conclusion, Shylock is as much sinned against as sinning. ...read more.