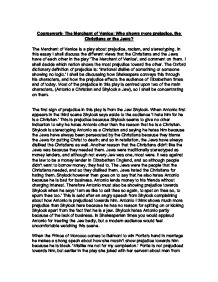 The Merchant of Venice: Who shows more prejudice, the Christians or the Jews?

Coursework- The Merchant of Venice: Who shows more prejudice, the Christians or the Jews? The Merchant of Venice is a play about prejudice, racism, and stereotyping. In this essay I shall discuss the different views that the Christians and the Jews have of each other in the play 'The Merchant of Venice', and comment on them. I shall decide which nation shows the most prejudice toward the other. The Oxford dictionary definition of prejudice is: 'Irrational dislike of something or someone showing no logic.' I shall be discussing how Shakespere conveys this through his characters, and how the prejudice effects the audience of Elizabethan times and of today. Most of the prejudice in this play is centred upon two of the main characters, (Antonio a Christian and Shylock a Jew), so I shall be concentrating on them. The first sign of prejudice in this play is from the Jew Shylock. When Antonio first appears in the third scene Shylock says aside to the audience 'I hate him for he is a Christian.' This is prejudice because Shylock seems to give no other indication to why he hates Antonio other than the reason that he is a Christian. Shylock is stereotyping Antonio as a Christian and saying he hates him because the Jews have always been persecuted by the Christians because they blame the Jews for putting Christ to death; and so in retaliation, the Jews have always disliked the Christians as well. ...read more.

This is because although they may have a grudge against Shylock for being Antonio's enemy; they have never met Tubal before, and are stereotyping him to be the same as Shylock. In the same scene, Tubal tells Shylock of one of Antonio's ships sinking. 'An argosy cast away comimg from Tripolis.' Shylock is delighted at this news. 'I thank thee good Tubal-good news, good news! Ha ha!' This is showing prejudice on Shylock's behalf, because he is showing his hate for Antonio by laughing at his losses, but for no logical reason. This is also hypocritical, because Shylock was complaining at Antonio for that very thing. 'Laughed at my losses, mocked my gains.' At the end of the second scene of the act, Gratiano makes a passing comment about Jessica being a Jew, although it is in good humour. 'But who comes here? Jessica and his infidel?' He refers to Jessica as an 'infidel' because she is a Jew and for no other reason. He does not however say it directly to her, and he is not being serious; but it shows what Christians think of Jews generally- as non believers. This is certainly prejudice because the Christians disliked the Jews purely for that reason. In Act three, it is made clear that all the Christians hated or disliked the Jews, because they are all biased towards Antonio. ...read more.

If he were a Christian they would not go that far, so they are making him do something for no logical reason. In conclusion, I think that the Christians as a whole show more prejudice than the Jews. This is partly because there are more of them, and partly because the prejudice they show is stronger. The Christians seem to show a lot more prejudice than the Jews throughout the play, but it is all said by different people, whereas all of the prejudice shown by the Jews was by Shylock alone. I think that the Christians showed more prejudice over all because the Jews were a disinherited nation and had settled in their country as if it were their own. The Christians would not like this, and so turned against them. I think that the Christian's prejudice is unessecary, and so would a modern audience, although in Shakesperian times it would have been thought right. This is probably why Shakespere wrote this play. To pass the message to the people of England that the jews are human beings too. Shylock is put forward as mean, evil, cunning, greedy, and scheming in some places, yet in others he seems tender and very much like the Christians. The Christians are put forward as kind, clever, generous people who would never hurt anybody. This is obviously biased, but Shakespere still gets the message through that the Jews are no different in a very clever way. Hannah Calver 10K ...read more.