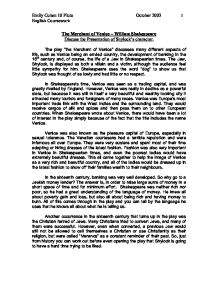 The Merchant of Venice - WilliamShakespeare - Discuss the presentation of Shylock's character.

The Merchant of Venice - William Shakespeare Discuss the Presentation of Shylock's character. The play "the Merchant of Venice" discusses many different aspects of life, such as Venice being an envied country, the development of banking in the 16th century and, of course, the life of a Jew in Shakespearian times. The Jew, Shylock, is displayed as both a villain and a victim, although the audience feel little sympathy for him. Shakespeare uses the word "dog" to show us that Shylock was thought of as lowly and had little or no respect. In Shakespeare's time, Venice was seen as a trading capital, and was greatly rivalled by England. However, Venice was really in decline as a powerful state, but because it was still in itself a very beautiful and wealthy looking city it attracted many tourists and foreigners of many races. Venice was Europe's most important trade link with the West Indies and the surrounding land. They would receive cargos of silk and spices and then pass them on to other European countries. When Shakespeare wrote about Venice, there would have been a lot of interest in the play simply because of the fact that the title includes the name Venice. Venice was also known as the pleasure capital of Europe, especially in sexual tolerance. The Venetian courtesans had a terrible reputation and were infamous all over Europe. They were very austere and spent most of their time adapting or hiring dresses of the latest fashion. Fashion was also very important in Venice in Shakespearian times, and even the poorest ladies would have extremely beautiful dresses. This all came together to help the image of Venice as a very rich and beautiful country, and all of the ladies would be dressed up in the latest fashion to show off their families wealth to their neighbours. In the sixteenth century, banking was very well developed. ...read more.

Launcelot sounds like more of a comic, playful character that is up to mischief when he speaks to the side whereas Shylock sounds spiteful and two-faced. In the next very short scene, Jessica talks to Launcelot about him leaving them. She talks of her own house as being hell and this brings it down in value as a place which is not to be desired. "Our house is hell, and though, a merry devil, didst rob it of some taste of tediousness." Act 2 Scene 3 Lines 1-2 This extract also shows the comedy in Lancelot's character and makes you want to trust him. However, there is also a hint of malevolence in Launcelot as he has now also been referred to as a kind of devil. However, this does not turn the audiences' minds against him as he is a very jolly playful character. When Launcelot has left the scene, Jessica has a very short monologue in which she tells the audience how ashamed she is to be related to her father. "To be ashamed to be my father's child. But though I am a daughter to his blood, I am not to his manners." Act 2 Scene 3 lines 17-19 She also subtly tells the audience that she is not very religious and does not follow the Jewish rules. She ends the scene by saying that she is going to end the troubles by becoming a Christian. "O Lorenzo, if thou keep promise, I shall end this strife, become a Christian and thy loving wife." Act 2 Scene 3. In the following scene, Lorenzo talks to his friends about the plan to steal Jessica from her father. They plan to take her during the masque and they will make her the torch-bearer as her first feat as a Christian. Lorenzo talks about the ways that Shylock could get into heaven after his death and also about the only way she could ever do wrong. ...read more.

In conclusion, I believe that Shakespeare uses the language very well to express emotions and to involve the audience with the play. He manages to gain our attention by making characters say things to the side, so it is almost like they are letting us in on a secret. I believe that the play would have done very well in Elizabethan times as it portrays many of the feelings of that era, such as hatred of Jews. It also depicts Venice as a place where things can go wrong and not just as a perfect place full of wonderfully rich people that everyone loves and where everyone gets on perfectly. It also does not use prostitution as a main theme so it would not have offended anyone who did not agree with such a thing. Shakespeare is an extremely clever writer who knows exactly how to get inside his audiences heads and change their opinions on things, with just a few lines of text he can change your image of someone from bad to wonderful, and just by changing around a couple of words on the page he can create a totally different image. The presentation of Shylock's character is very bad throughout the play, he is exemplified as someone who is evil and should not be trusted. He juxtaposes Shylock and Antonio throughout the play as good and evil, Antonio being the good one. Because he makes Shylock seem so bad and evil it makes Antonio seem much greater than he would do if the worst character in the play were Bassanio. The play is a great success overall and Shakespeare creates the effect that I am sure he wanted to. If the play was not excellently written then it would not still be around today and being studied by so many students all over the country. I am almost certain that the play will still be around for a lot longer and will continue to be enjoyed by many others in the future. Emily Cohen 10 Pluto October 2003 1 English Coursework ...read more.