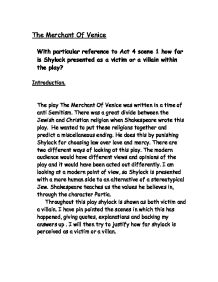 The Merchant Of Venice - With particular reference to Act 4 scene 1 how far is Shylock presented as a victim or a villain within the play?

The Merchant Of Venice With particular reference to Act 4 scene 1 how far is Shylock presented as a victim or a villain within the play? Introduction. The play The Merchant Of Venice was written in a time of anti Semitism. There was a great divide between the Jewish and Christian religion when Shakespeare wrote this play. He wanted to put these religions together and predict a miscellaneous ending. He does this by punishing Shylock for choosing law over love and mercy. There are two different ways of looking at this play. The modern audience would have different views and opinions of the play and it would have been acted out differently. I am looking at a modern point of view, so Shylock is presented with a more human side to an alternative of a stereotypical Jew. Shakespeare teaches us the values he believes in, through the character Portia. Throughout this play shylock is shown as both victim and a villain. I have pin pointed the scenes in which this has happened, giving quotes, explanations and backing my answers up . ...read more.

Shylock is presented as a villan but we are made to feel sympathy for him in view of the fact that of his daughter leaving him with nothing. Even though Shylock isn't in this scene we get varied impressions of him. Shakespeare did this to make the audience form an opinion about Shylock and I think the opinion that the audiences form is that Shylock is a villain. In Act 2 scene 8 there are many aspects showing Shylock as a victim. An example of this is when Salarino says, " why all the boys in Venice follow him" This displays him as a victim as it illustrates that Venician children have a higher status than a Jewish man. Although in this scene Salarino and solanio are mimicking Shylock. The main content of what they are saying could portrait him as a villan. "My daughter! O my ducats! O my daughter" Throughout this speech when Solarino is mimicking Shylock there is more reference to his riches than to his daughter. This suggests that he is more hurt about the loss of his riches then his daughter. ...read more.

This doesn't make us think very highly of Shylock as he is happy to take a pound of flesh no matte what it takes. Though parts of the play affect our views as Shylock was driving to act like this by the Christians poorly treating him Shylock implacably refuses to show mercy until he is given no choice as blood is not mentioned in the bond " This bond doth give thee here no jot of blood" This means Shylock has to show mercy ads you can not take a pound of blood without shedding blood. We now see shylock as a victim as he didn't get his revenge and is left with nothing, not even his dignity. To conclude I would say that Shylock is too controversial a character to be a victim or a villain., There are different Factors to show Shylock as a victim or a villain like his is portrayed as a villain when he wants to take Antonio's life but is displayed as a victim when his daughter Jessica takes his possessions. In perspective I would say that Shylock is rather a villain then a victim as we have seen more evidence of him being displayed as a villain. Stephanie Brightman 10R ...read more.