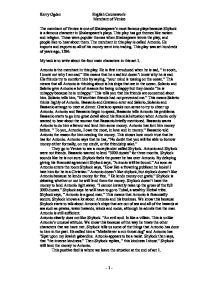 The Merchant of Venice - Write about the four main characters in act 1.

The merchant of Venice is one of Shakespeare's most famous plays because Shylock is a famous character in Shakespeare's plays. This play has got themes like racism and religion. These were popular themes when Shakespeare wrote the play, and people like to hear about them. The merchant in this play is called Antonio. He imports and exports so all of his money went into trading. This play was set hundreds of years ago, 1596. My task is to write about the four main characters in this act 1. Antonio is the merchant in this play. He is first introduced when he is sad, " in sooth, I know not why I am sad." His means that he s sad but doesn't know why he is sad. His friends try to comfort him by saying, "your mind is tossing on the ocean." This means that all Antonio is thinking about is his ships that are in the ocean. Solanio and Salerio give Antonio a lot of reasons for being unhappy but they decide "he is unhappy because he is unhappy." This tells you that his friends are concerned about him. ...read more.

"Shylock is not impressed because he is a Jew and doesn't eat pork. "To smell pork: to eat of the habitation which your prophet the Nazarite conjured the evil into." When Antonio enters Bassanio sucks up to him, "This Signior Antonio." When Shylock nearly agrees to lend Antonio the money Bassanio is happy, "Shylock, do you hear?" When Shylock finally agrees to lend them the money Bassanio is cautious, "You shall not seal to such bond for me: I'll rather dwell in my necessity." Bassanio feels that Shylock is a villains, "I like not fair terms and a villains mind." Bassanio isn't sure weather or not he wants the money now he knows the terms. This shows us that Bassanio has true feelings of friendship for Antonio and doesn't want to put their life in any danger. With this negative feel from Bassanio we leave them at Act 1. I will now write about Shylock. Shylock is a Jew and he is a moneylender. Antonio and Bassanio go to him wishing to borrow money. Antonio and Bassanio want "three thousand ducats." Shylock knows a lot about Antonio. Shylock wishes to speak with Antonio. ...read more.

" You need not fear, lad, the having any of these Lords." They have returned home. " To return to their home and to trouble you will no more suit." Portia is pleased that they have all gone. " I pray God grant them a fair departure." Nerissa reminds Portia of a "veterian, scholar and a soldier, that came hither." Portia quickly replies, " Yes, yes! It was Bassanio." The speed with which she reacts suggests to the audience her attraction towards Bassanio a servant comes and informs Portia that "four strangers seek for you." It means more suitors. The "Prince of Morocco," is one of them. Portia doesn't like the colour of the skin of the Moroccan. Portia appears to be racist. "If he have the condition of a saint and the complexion of a devil, I had rather shive me than rive me." In this predicament is where we leave Portia at the end of act 1. I thought that the play was good and the best part is the terms that Shylock sets for Antonio and Bassanio. The predicament that Peoria is in is good as well because she can't refuse or accept to marry anyone. So I will read the rest of the play to see what happens. Kerry Ogden English Coursework- Merchant of Venice - 1 - ...read more.