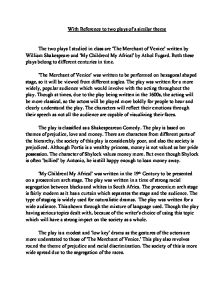 'The Merchant of Venice' written by William Shakespeare and 'My Children! My Africa!' by Athol Fugard.

With Reference to two plays of a similar theme The two plays I studied in class are 'The Merchant of Venice' written by William Shakespeare and 'My Children! My Africa!' by Athol Fugard. Both these plays belong to different centuries in time. 'The Merchant of Venice' was written to be performed on hexagonal shaped stage, so it will be viewed from different angles. The play was written for a more widely, popular audience which would involve with the acting throughout the play. Though at times, due to the play being written in the 1600s, the acting will be more classical, so the actors will be played more boldly for people to hear and clearly understand the play. The characters will reflect their emotions through their speech as not all the audience are capable of visualizing their faces. ...read more.

The type of staging is widely used for naturalistic dramas. The play was written for a wide audience. This shown through the mixture of language used. Though the play having serious topics dealt with, because of the writer's choice of using this topic which will have a strong impact on the society as a whole. The play is a modest and 'low key' drama as the gestures of the actors are more understated to those of 'The Merchant of Venice.' This play also revolves round the theme of prejudice and racial discrimination. The society of this is more wide spread due to the segregation of the races. For the play 'The Merchant of Venice,' we had to create an improvisation based on the childhood friendship between Antonio and Shylock. ...read more.

After the departure of Shylock's friend, I question him in an anxious tone of voice, why he was dealing money with Christians. Then I praise him for charging interest. The next day, Shylock and Antonio confront each other in school, where my character meets the Antonio's Dad. There we have a war of words; I will play this part with raged mood as I am angered at the Christian father accusing Shylock of wrong doing. I will stress the line where I warn off Antonio's father about Antonio staying away from Shylock, this will give a sense of foreshadowing difficulties between Antonio and Shylock. My gesture will show how much I am dislike Shylock playing with Christians. This will give the audience a clear idea of what I am trying to portray to them. ...read more.