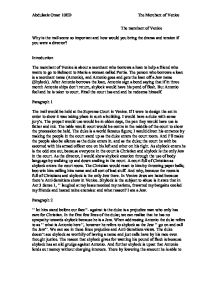 The merchant of VeniceWhy is the trail scene so important and how would you bring the drama and tension if you were a director?

The merchant of Venice Why is the trail scene so important and how would you bring the drama and tension if you were a director? Introduction The merchant of Venice is about a merchant who borrows a loan to help a friend who wants to go to Belmont to Marie a woman called Portia. The person who borrows a loan is a merchant name (Antonio), and Antonio goes and gets the loan off a Jew name (Shylock). After Antonio borrows the loan, Antonio sign a bond saying that if in three month Antonio ships don't return, shylock would have his pond of flesh. But Antonio feel and he is taker to court. Final the court has end and he redeems himself. Paragraph 1 The trail would be held at the Supreme Court in Venice. If I were to design the set in order to show it was taking place in such a building. I would have a duke with some jury's. The props I would use would be in olden days, the pen they would have use is father and ink. The table would court would be centre in the middle of the court to show the procession be held. ...read more.

When Gratiano abuse shylock I would director the actor delivering these words in an emotional and rude disrespectful way. The actor playing as shylock would feel a bit down and say as well as sorry for him self whiles Grantiano is saying these words. The words said my Grantiano tell us that his character is about a mean sad person who does like Jewish people in Venice there are many Jew's there. Paragraph 4 When the duke read the letter out from Ballerio the expectation that set up for the audiences about 'Balthazar' is that the thing that Balthazar is a mystery character. The words and phrase about him are intended to impress him about that he is a mystery character. Before Portia gets summoned to appear in the male thinking that the court, Portia would be thinking that the court is full of men and she would be intimidated by them. And Portia would be thinking off what will happen when she goes in the court room. Paragraph 5 Portia said in her speech that as one demands for justice. I would he direct the actor playing as Portia to talk hardly as if she is reciting a poem as she says he speech in lines 180-193. ...read more.

The ways that shylock has two options: one: he shall become a Christian immediately in court, learning all he possesses at his son in law Lorenzo, and his daughter. Antonio has given up his prejudices against shylock from the past. Before shylock leaves the courtroom I would directed his lasted words saying: '' I hope you got what you wanted old Christian''. The instruction that I'll give to shylock is that as leaves the courtroom, I would directed him to leave the courted room with a sort of moody body language. Paragraph 10 When Portia appears in the trial scenes she uses language differently. One of the languages that Portia uses is poetical language, and when she appears as a man in the trail, she would act as a man in the trial scene and with a man tone of voices during the trail. And she would have to act during the trial scene. Paragraph 11 At their end of the trial scene shylock receives judgement but he doesn't receives justice because the outcome at the end was that shylock never got his pond of flesh justice because shylock never receives his pond of flesh from Antonio at their of the trial scene, so there was no qualities of mercy display in the trial scenes at the end, When shylock got his Judgement. ?? ?? ?? ?? Abdulaziz Omar 10ED The Merchant of Venice ...read more.